It's been a strange week or so of training, as the Belfast MMA league was cancelled when I'd specifically taken time off work to prepare for it. Instead of prepping for the fight I thought I'd use the time to head to Primal and squeeze as many lessons as I could in with Owen and some of his fighters.

While there's little point in going over the intrinsics of the classes or one-on-ones I had with Owen, suffice to say I'm improving somewhat. It's still extremely frustrating (there's that word again) trying to get certain technique down - yep, BJJ - but I'm getting more and more used to moving in a fight, taking shots and throwing straight back.

The one thing I've moaned about more than anything so far was my weight. I spoke to John Connor in The ISI the first week I started intense training . I was around 86 kg and 16.5% bodyfat. Hardly obese, but there was no way I was going to get in a cage and last the distance with anyone in that kind of shape. It wasn't until looking at a repeat of the show Uploaded (where I guested) that I realised how much weight I was carrying then. I'd trained with my mate Brian while he was partaking in JOE Gets Ripped, so I lifted a lot of weights, drank a lot of protein shakes, got big and then stopped training as much. Never a good idea. I'd always knocked around the 82kg mark - even when training for an endurance event.

END_OF_DOCUMENT_TOKEN_TO_BE_REPLACED

Getting up this morning I was under 79kg. Now don't get me wrong, it varies, but I'm actually looking forward to going back to the ISI and getting my bodyfat checked again; the shape I've gotten in is unreal and I haven't even started the scary sounding 'Fight Camp' yet.

That said, my mates have nicknamed me "Zero Craic" because, frankly, I am f**k all craic. It's not even about alcohol intake - I've never been a big drinker - just more about the social aspect to it. Being around drunk people while you're not just sober but also sometimes hungry is horrible. Apparently my disdain for such instances is all too clear on my face...

The plan is to kick on, up my skill set and impose my game more. The basics are becoming second nature now; it's getting better.

Congrats to my amazing coach Owen Roddy on his Brown Belt. He achieved the lofty goal last Friday and was awarded the high level belt by his coach, John Kavanagh. 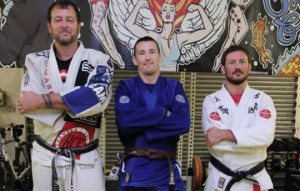 END_OF_DOCUMENT_TOKEN_TO_BE_REPLACED

Owen is launching a small class; a 12 week beginner programme starting Thursday August 1st. If you're interested in BJJ, Thai Boxing, wrestling, MMA or physical fitness you will find it in this programme. It's limited to 20 places and they'll go fast so call or text 0857145233 to book your spot. For getting in shape alone this is worth it folks.

Don't forget to give  Owen's one-on-one page a like; SBG city centre and the lads at Bodyfirst for their support. For more info and pics have a gander at the From Afar page - the production company making the doc for Setanta Sports.

popular
One of the best movies of the decade has just been added to Netflix
Cristiano Ronaldo 'agrees £173m-a-year deal' with Saudi club
The latest Star Wars episode is directly based on an IRA funeral
Country singer Jake Flint, 37, dies in his sleep just hours after his wedding
11 Irish counties in the spotlight as Gardaí crack down on sex trade
20 years ago, one of the best sci-fi movies of the 21st century was a box-office bomb
U2 drummer Larry Mullen Jr. says band may perform without him in 2023
You may also like
4 weeks ago
Conor McGregor slammed for Halloween photo of mum in 'black face'
2 years ago
Paddy Holohan has been suspended from Sinn Féin over his claims that "scum" underage girls were having sex with men and blackmailing them
3 years ago
Straight Blast Gym Ireland to open new location in Dublin this month
3 years ago
WATCH: Irish MMA fighter shares lovely video of him and his grandad singing 'Imagine' together
4 years ago
WATCH: Conor McGregor is beaten by Khabib Nurmagomedov as all hell breaks loose at the end of the fight
1 week ago
'Soccer's Nelson Mandela' - Joe Brolly questions Roy Keane after World Cup comments
Next Page