From the first time I met Owen Roddy in Primal he talked about "Fight Camp." Saying how my weight coming down would be fine, would happen naturally with rolling and watching the diet, and then how Fight Camp would then start six weeks out from the fight.

Fight Camp sounded daunting. Training twice a day, eating like a culinary monk and generally existing only to train. That's what the lads in Primal do every single day and their dedication is genuinely staggering. One of the Primal lads Owen coaches, Danny Hall (pictured below warming up), took part in The Evolution Fighting Championship on Sunday in Tullamore - winning his 75kg fight with a second round stoppage.

Being that I'm already thinking of the food binging and general chilling out I'll be doing after my fight happens, I was shocked to see Danny in a boxing class the following day - a Bank Holiday no less - ready and as enthusiastic to train as ever. 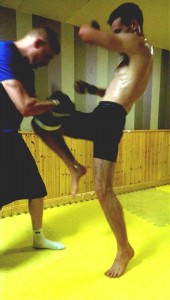 END_OF_DOCUMENT_TOKEN_TO_BE_REPLACED

When I said it to him he just shrugged and went "Like Conor McGregor says,always be ready." The more I train, the more I realise the special kind of tough stuff these lads are made of.

Speaking of Conor McGregor, I was training with Owen in SBG on the Longmile Road on Friday evening and bumped into the UFC star, who I thanked for giving me my "fight name" in the below video. Go a few minutes in to hear Adrian Collins ask him about it...

END_OF_DOCUMENT_TOKEN_TO_BE_REPLACED

The difference with my 'Fight Camp' is that I'm working a fairly intense job as the editor of the organ you're currently reading and trying to train. While getting out to classes in Primal can be tough enough after a day at the office, it's more the general tiredness of a full day of work and then a 90-minute plus class of varying degrees of intensity where I'm repeatedly punched in the head while trying to grasp the technique being taught.

When I'm not training I'm worrying about not training and when I am I'm wrecked but invigorated afterwards. I'm also in the best shape of my life, having gone into John Connor in The ISI in Coolock for a treatment and a bodyfat check. It's now down to 9% from 16.5% and I've put on "about half a stone of muscle". Still a way to go, though... hopefully a couple of "strong man" sessions with John help me get stronger and leaner.

As ever, thanks to Owen for his amazing coaching, words of wisdom and generally being a gentleman. Thanks to Bodyfirst for keeping me in supplements and to the guys at SBG city centre for letting me use their digs to train.

Owen is still enrolling his PrimalMMA beginner programme. €55 a month and you can get details by calling 0857145233 or emailing Primalmma@gmail.com. I can't recommend it enough - even if you've no interest in actually fighting.

Finally, If you wanna buy tickets to the event I'm fighting in there will be a great card of professional fights on afterwards too.

popular
One of the best movies of the decade has just been added to Netflix
Cristiano Ronaldo 'agrees £173m-a-year deal' with Saudi club
The latest Star Wars episode is directly based on an IRA funeral
Country singer Jake Flint, 37, dies in his sleep just hours after his wedding
Katherine Ryan says famous TV star is a ‘predator’ and everyone in industry knows
20 years ago, one of the best sci-fi movies of the 21st century was a box-office bomb
Surprise frontrunner emerges as potential next James Bond as producers 'love him'
You may also like
4 weeks ago
Conor McGregor slammed for Halloween photo of mum in 'black face'
2 years ago
Paddy Holohan has been suspended from Sinn Féin over his claims that "scum" underage girls were having sex with men and blackmailing them
3 years ago
Straight Blast Gym Ireland to open new location in Dublin this month
3 years ago
WATCH: Irish MMA fighter shares lovely video of him and his grandad singing 'Imagine' together
4 years ago
WATCH: Conor McGregor is beaten by Khabib Nurmagomedov as all hell breaks loose at the end of the fight
4 years ago
WATCH: The Irish have taken over Las Vegas ahead of the McGregor fight
Next Page