"Don't use it as an insult. There is nothing wrong with being gay."

England captain Joe Root has responded to apparent sledging from Shannon Gabriel by telling the West Indies fast bowler "there is nothing wrong with being gay".

TV footage of Root, who hit an unbeaten century during the third Test in St Lucia, captured the moment he responded to a comment from Gabriel.

Though Gabriel's original comment was not picked up, umpires are said to have warned him about his language.

"Don't use it as an insult. There's nothing wrong with being gay."

Speaking after the close of play, Root refused to elaborate on what exactly had been said. 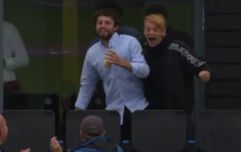 WATCH: This man is an absolute pro at handling his drink

END_OF_DOCUMENT_TOKEN_TO_BE_REPLACED

"Sometimes things are said on the field but they should stay on the field. I think they can sometimes be caught in the moment and not always say what you want to say or think you're saying," the 28-year-old said.

"I think you should leave it there."

Though reports claim the matter is now closed and no further action will be taken, West Indies coach Richard Pybus promised to review the situation if anything is reported.

"Shannon is a proper old-school fast bowler, I think we need to find out if there is anything behind the rumours and then we'll address it."

popular
Amazon Prime Video has just added 21 big movies to its library
A nationwide Eir outage has a number of people without broadband
Fianna Fáil denies paying for bots to boost Stephen Donnelly tweet
The six Eurovision countries with "irregular voting patterns" have been revealed
Shock as dead dolphin vandalised with graffiti on Dublin beach
One of Liam Neeson's best ever performances is among the movies on TV tonight
Amber Heard "fought really hard" to appear in Aquaman 2 despite pared down role
You may also like
2 years ago
England cricket player Ben Stokes describes The Sun as "low and despicable" in strong statement
2 years ago
In case you missed it, the Cricket World Cup Final was absolutely mad
5 years ago
VIDEO: If you find cricket boring, Dara O'Briain's commentary will change your mind
5 years ago
WATCH: Streaker sent to jail for one of the greatest streaker runs in recent memory
6 years ago
VIDEO: Supporter defies gravity (and other fans) to spectacularly catch a stray ball
7 years ago
Twitter was ecstatic after the Irish cricketers did the business once again at the World Cup
Next Page