Brought to you by Intersport Elverys & adidas

It's the most talked about rivalry since Stephen Ward and the forward button on WhatsApp, and the talking is finally set to grind to a bitter halt.

END_OF_DOCUMENT_TOKEN_TO_BE_REPLACED

JOE and SportsJOE will face off in their all-deciding Intersport Elverys five-a-side derby in Ringsend this Thursday with no less than the office bragging rights in the melting pot.

For years, JOE have claimed superiority but the up-and-coming SportsJOE band are a force to be reckoned with and are sick of being know as the little brother.

Wearing boots from the new adidas Exhibit range, both sides couldn't be kitted out any better so there's no excuses for wayward shots or poor touches. 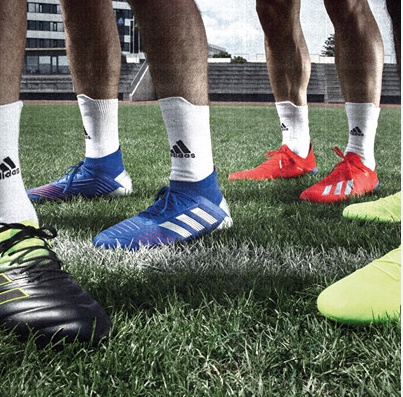 It's winner takes all, it's a 20 minute journey to the bows of Landsdowne Road, but a journey into immortality beckons. This is what it's all about.

Get the adidas Exhibit boots at Intersport Elverys right here.

END_OF_DOCUMENT_TOKEN_TO_BE_REPLACED

Drumshanbo's finest son. Has a right foot like Emlyn Mulligan and a footballing brain to envy Terry Hyland's. Like Mulligan, he too hasn't played in Croke Park. He knows his way around Ringsend astroturf though and will make a fearless, vocal leader for this JOE team next Tuesday.

How this misunderstood hurling star hasn't made the Galway senior team is one of the great mysteries of his home county. Loughnane doesn't bog himself down with such injustices however, and spends any spare time farming the land in Cappataggle.

A Kiltimagh legend who was on the cusp of hanging up the boots at the beginning of the year. Thankfully for this JOE team, their star turn of all that Celebrity Bainisteoir fame was convinced to stay on for one last hurrah.

The elder of the Kinsella brothers, Carl is renowned for his mouthing on the pitch and the story goes that he once called out a phantom grounds man at Ringsend astro turf.

The left winger would argue in an empty room but he's well able to play too. Like a young Ricey McMenamin.

The skilful operator in the middle third who makes this JOE team tick. Pat McCarry will more than likely be tasked with ruffling Kinsella up, though the Firhouse Flyer has skinned more daunting challengers in the past.

Has an engine like Shergar and the rumour-mill has it that he's been living off a €2 million ransom package....

Derry born Doherty models his game on heroes Cristiano Ronaldo and Paddy Bradley but resembles more of a Glenn Whelan type figure in reality. Dogged and work-man-like, he can always be trusted to get the job done and he'll have his SportsJOE troops wired to the moon.

A teak tough Dubliner who has found a home away from home in county Kildare. You can take the man out of Tallaght but McCarry will still be found flinging himself into 30:70 tackles with the studs on show.

The Tipperary youngster talks about his gym work more than a bodybuilder but is actually the skinniest player on show.

Struts around the park with a sweat-band and ankle socks but McCann's silky skills give him leeway for the theatrics.

Gill, once the next Tadhg Furlong as a rugby prospect in UCD, has switched codes and his physicality will be a huge weapon for this SportsJOE team.

A graduate of Ballyfermot's famed youth academy, SportsJOE's football brain is well able to play too.

Intersport Elverys is your destination for football boots from all the top brands, including the latest from adidas. Head to your nearest store or shop online to get yourself kitted out!

Brought to you by Intersport Elverys & adidas

popular
RTÉ tries to solve Michael Collins murder in new documentary
Two men arrested after woman is stabbed in Kerry
QUIZ: Can you get top marks in this short but tricky Irish geography quiz?
4-year-old girl killed in Sligo caravan park named as Alice Dunleavy
Two long-thought-dead Marvel projects appear to be in the works
QUIZ: Can you score 12/15 in this difficult General Knowledge Quiz?
Family of Ashling Murphy share heartbreaking tribute at Fleadh Cheoil
You may also like
4 days ago
Planning your next adventure? Here are 7 Irish attractions you need to visit this summer
1 week ago
The Resort is the new must-watch for fans of big murder mysteries
1 week ago
COMPETITION: WIN a €700 voucher for Big Style Watersports in Mayo
1 week ago
3 simple ways to help the men in your life open up, according to an Irish therapist
1 week ago
COMPETITION: WIN an overnight stay in Belfast and two V.I.P attraction tickets
2 weeks ago
COMPETITION: Share your best homemade burger to WIN a €1,500 holiday voucher
Next Page