Our Champions Cup previews continue today as we look forward to Pool 3 of the inaugural tournament following on from our pool 1 and pool 2 previews over the last few days.

Pool 3 has the last of the Irish teams in the form of Ulster, who have the unenviable task of facing last year’s Heineken Cup winners Toulon, English powerhouses Leicester and the *cliche alert* 'always dangerous in Europe' Llanelli Scarlets.

We did mention on Monday that Munster’s Pool 1 is possibly the group of death but this group is right up there in the difficulty stakes. Ulster will have to be on top of their game from the off if they want to make progress in the competition.

Here is our take on how the group will definitely play out (definitely is a strong word, ‘could’ would probably be better)…

END_OF_DOCUMENT_TOKEN_TO_BE_REPLACED

Toulon are without doubt the top dog in this group and who can argue? Back-to-back winners of the old Heineken Cup, they have gotten stronger if anything. They are a team of superstars and the closest thing to galácticos in world rugby. We urge you to look up the Toulon squad and point to an area where it could be considered weak.

They have a depth of quality all over the pitch and they have a passionate group of fans who love rugby and are not simply jumping on the bandwagon. On paper they are near unbeatable, but luckily for the other teams in the group, rugby is played on the pitch and not on paper, although it must be said Toulon are pretty good on the pitch as well. 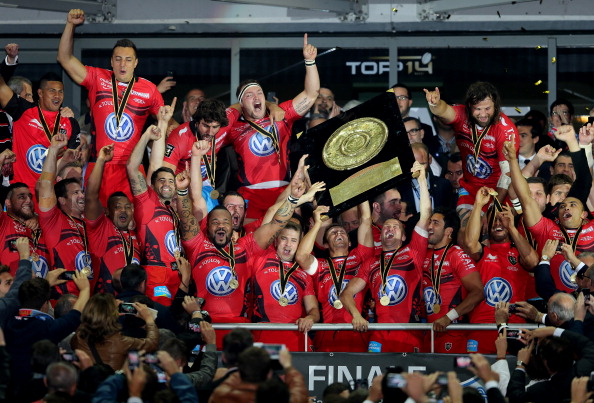 They like to play a power game, similar to the type of game played by South Africa and a good example of this came last year when they bullied Leinster off the pitch at the Stade Mayol. But their backline is oozing with talent with the fantastic Matt Giteau pulling the strings from either centre or fly-half. The arrival of Argentine fly-half Nicolas Sanchez is a bit under the radar but his a really talented 10 and adds a running option that they don’t have when Freddie Michalak plays.

But they are not invincible, as Munster almost showed last season when they nearly humbled the French giants in the Heineken Cup semi-finals, though it must be said that Ulster will need to be at their best to progress from this group…

END_OF_DOCUMENT_TOKEN_TO_BE_REPLACED

Scarlets seem to be the likely whipping boys of the group although they have already drawn with Ulster in the Pro12, so the northern side will need to be wary of complacency heading into the fixtures with the Welsh side.

Leicester are not exactly flying in the Aviva Premiership either and have lost as many of the three games they have won this season. There is no clear bottom rung of this table at the moment but after the first round of games we should have a clearer idea of how the table is going to pan out.

At the moment we are going with Scarlets, because we think Ulster will just have too much in the tank for the Welsh side and we also think that Leicester are bound to get their sh*t together sooner rather than later.

END_OF_DOCUMENT_TOKEN_TO_BE_REPLACED

This is where we look at which Irish players need to impress to be sure of their spot on the roster for next year’s Rugby World Cup? The Schmidt is about to either hit the fan or get real for Ulster winger Craig Gilroy…

The flying winger exploded onto the international scene in November 2012 when he scored a superb solo try against Argentina. His pace and footwork injected life into the limp Irish team and inspired them to put Argentina to the sword. He then played the entire Six Nations in 2013 which turned out to be quite a disappointing tournament, finishing fifth after such a great start against Wales.

If Gilroy is to be included in the Irish squad for November, and next year, he needs to claim a regular starting berth in Ulster and string together some good performances. Plus, if he scores more tries like the one above against Glasgow last weekend, we can’t see any reason why he can’t make another impact at international level.

The 'Conor Murray come from nowhere to get the Irish number nine shirt at the World Cup in New Zealand in 2011 candidate for the most likely unknown player or player with little international experience to make the World Cup squad for England 2014'. . .

And the award goes to Jared Payne. . .

After a Payne-staking wait to nationalise the Kiwi, Jared Payne is in a position to play for Ireland this November and stake his claim for a spot in the 2015 World Cup squad. The sublimely talented utility back is real star quality and if he is successful in his role as number 13 for Ulster, he could be the ideal replacement for the departed BOD (Yes, we know we aren't the first people to say this).

Could he bolt and make the Irish squad? We sure as hell think so…

Something along the lines of “Jared bringing the Payne” and the description would be “Schmidt’s about to unleash the Payne”.

Ulster should get through as one of the highest placed qualifiers provided they can get something from their games against Toulon...

The Big Reviewski || JOE · The Big Reviewski with Ray Liotta, Goodfellas facts & Tom Hanks making us cry
popular
The JOE Friday Pub Quiz: Week 262
BBC reporter covering petrol shortage called Phil McCann
BBC reporter Phil McCann responds after going viral
QUIZ: The Ultimate Movie Gangster Quiz
QUIZ: How well do you know the life and work of Denzel Washington?
Jason Byrne forced to cancel tour dates due to a heart condition
Waterford has been crowned as the best place to live in Ireland
You may also like
7 months ago
Defence grows for Billy Burns after one of the roughest days of his rugby career
7 months ago
Major upside to Ireland's Six Nations challenge that should make all the difference
8 months ago
John Cooney comes to defence of JJ Hanrahan after kicking criticism
8 months ago
Cardiff conversation that proved Paul O'Connell always put the team first
8 months ago
Ian Keatley on Ronan O'Gara's deadpan advice and his most treasured Munster jersey
9 months ago
Springboks legend must have the greatest jersey swap collection in rugby
Next Page