His time at Liverpool ended abruptly – so much so that the fact he later played for Everton caused little more than a murmur – but Sander Westerveld claimed a lot of silverware from his brief time at Liverpool.

In the summer of 1999, Liverpool were in the hunt for a solid goalkeeper. Though David James and Brad Friedel would go on to have solid Premier League careers elsewhere, their time with the Reds was better known for their inconsistencies, so the Liverpool board were happy to plash out £4 million for the Dutch keeper who was gaining quite the reputation for himself on the Continent.

He spent three years at Vitesse Arnhem, helping them to European qualification while also making his international bow against Brazil before Gerard Houllier decided to make Westerveld the most costly goalkeeper the English top-flight had ever seen.

END_OF_DOCUMENT_TOKEN_TO_BE_REPLACED

With a nickname of ‘The Bomb’ – gained because of his long punts down field, often indulging in the crowd during the warm-up by drop-kicking the ball into the stand behind the opposite goal – and not short in self-confidence, his first season was nothing short of a success.

The club didn’t win any silverware that season, but the Houllier project was gathering pace and behind the formidable defensive partnership of Sami Hyypia and Stephane Henchoz, the Reds were becoming increasingly difficult to break down.

The following season would be the club’s finest in a long time as they claimed the League Cup, FA Cup and Uefa Cup treble, but while collectively the Merseyside club was improving, Westerveld’s performances were unfortunately going the other way. 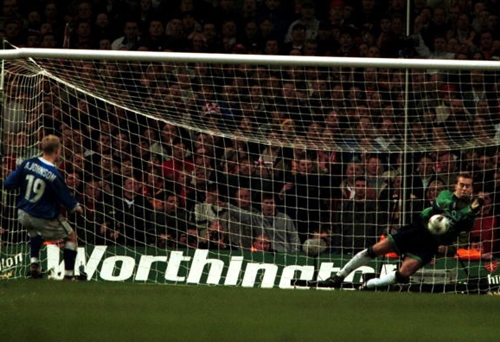 END_OF_DOCUMENT_TOKEN_TO_BE_REPLACED

A helping hand in Liverpool's League Cup win of 2001

While he did play an important role in the League Cup win over Birmingham in particular, saving a tame Andrew Johnson penalty in the shoot-out, his lack of presence was increasingly becoming a feature, even punching the ball into his own net against Chelsea in October 2000.

Houllier was linked to a number of different goalkeepers, though the Dutchman remained bullish about his prospects.

“As long as we don't buy Edwin van der Saar or Peter Schmeichel I won't be worried because I don't mind who sits on the bench,” he told the press.

END_OF_DOCUMENT_TOKEN_TO_BE_REPLACED

“I’ve got a lot of confidence in myself and will not allow anyone to take my place at Liverpool for as long as I am under contract here.”

Unfortunately from the Kop’s perspective, he had more confidence than his performances suggested and his horror showing in the Uefa Cup Final nearly cost Liverpool dearly. It was not surprising that Liverpool dipped into the transfer market that summer, though the purchase of two keepers in four days in Jerzy Dudek and Chris Kirkland took him by surprise, “I'm absolutely disgusted” he conceded and his days were numbered. 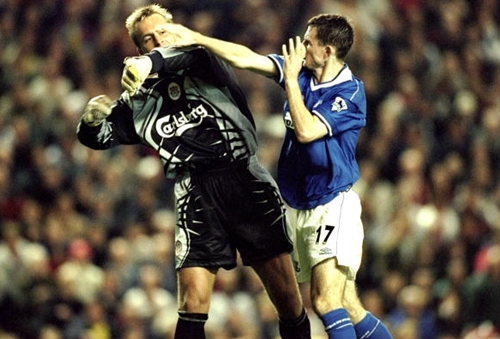 Getting to grips with Everton's fox-in-the-box Franny Jeffers

A move to Spain saw him play in the Champions League with Real Sociedad and after four years in Spain, including a loan move to Mallorca, he came back to England to Portsmouth. His time at Fratton Park was nearly as short as the man that signed him, Alain Perrin, and his inconsistency saw him make only fleeting appearances, before going on an emergency loan to Everton.

The fact that there was so little made of this by Liverpool, or indeed Everton fans, tells you just how far his stock had fallen and played two games for the Toffees under David Moyes, before returning to Fratton Park where Harry Redknapp released him from his contract.

Spells in Spain, Holland, Italy and most recently South Africa – his playing contract was terminated by Ajax Cape Town at the end of last season before he took a goalkeeping coaching position – followed, but he will be best remembered for that trophy laden spell at Anfield and a quick fall from grace.

Speaking about his time at Liverpool at the time, he admitted that he never quite took to the local humour, which he claims affected his mindset.

“If someone two metres away from me drops their glass of beer on the floor, as was the case on Saturday night, you can bet that a wise guy has asked if it was me,” he explained.

“Even my postman gets in on the act when he gives me my letters. ‘Watch you don't drop them', he says. I don't like these comments and they don't exactly help your confidence either.”

The quick rise and fall of Sander Westerveld.