Johann Van Graan knew he would be Munster head coach for around a fortnight before the news was officially confirmed. The moment he did, his phone was pinging non-stop.

Van Graan will soon arrive at Munster's University of Limerick headquarters and start bedding in as the province's new head coach.

There has been no word, yet, about whether Munster will still be seeking to fill the Director of Rugby position that Rassie Erasmus is due to vacate in order to return to South Africa. Erasmus himself may reveal a bit more after the away Champions Cup game against Castres but, one suspects, coaching matters will be left for next Tuesday's media session at U.L.

END_OF_DOCUMENT_TOKEN_TO_BE_REPLACED

After speaking with media sources in South Africa, and former Springboks captain and Munster centre Jean De Villiers, Munster would appear to have a meticulous, tactically astute coach on the way and one that prides himself on creating a close bond with his players.

De Villiers played under Van Graan, when he was forwards and attack coach, at the 2015 World Cup and is still in regular touch with the man often referred to in Sout African rugby circles as 'Aap'. He attempted to get through to him on Wednesday afternoon, when the Munster job was confirmed, but was unsuccessful on the first couple of occasions.

When he eventually did get hold of him, Van Graan told him that he had been inundated with messages from friends, colleagues and former players - in South Africa and dotted across the globe - stressing what a big job he had landed.

Van Graan suspected he would be stepping into a highly pressurised role with a team that expects to be competing for silverware each season, but the sheer number of messages and calls [received and missed] took him aback. This is his first gig as head coach and he has landed one of the most prestigious coaching jobs in the game. 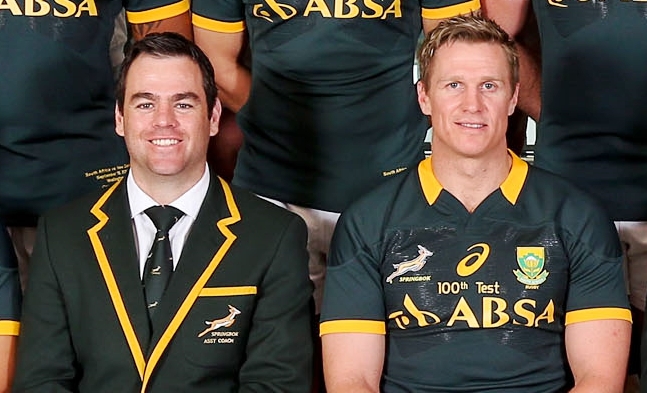 Van Graan's appointment was discussed on the latest episode of The Hard Yards podcast [from  3:30 below] by Stephen Ferris and former Munster outhalf Ronan O'Gara.

END_OF_DOCUMENT_TOKEN_TO_BE_REPLACED

O'Gara believes Munster are keen to develop current assistant coaches Felix Jones and Jerry Flannery, who will stay on under the South African in roles of increasing responsibility. "It's a massive club," said O'Gara, "it's a great club and there are people that know their rugby inside out there, so they need one of the best coaches out there.

"Just because he has no experience as a head coach, it doesn't really matter. We have to wait and see - the guy may be excellent, or he may not be excellent."

On the matter of Munster potentially bringing in a Director of Rugby, O'Gara commented:

"All secure coaches would feel even securer if they had a really, really experienced figure over them, giving them direction."

He added: "I don't think a director of rugby can be hands on... He's looking after the overall, global structure and he has his coaches coaching."

Van Graan will get a real sense for the task at hand when he arrives at Munster HQ but the sheer amount of phone messages have already given him an idea of just how much Munster matters to people.