We're not sure if he's a Rangers fan anymore though...

Johnny Hayes may not be the most well-known Irish international player, but after this classy gesture, he might well be the soundest.

Hayes is a Celtic player living in Glasgow, and he saw something a little unsettling while he was driving home last week. 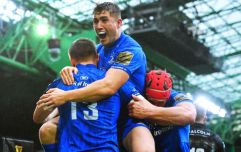 END_OF_DOCUMENT_TOKEN_TO_BE_REPLACED

A group of bullies were beating up a young child before Hayes interrupted.

Callum McIvor was being "punched, kicked and thrown about", until Hayes picked him up off the ground and made sure he was alright.

The Dublin man offered to give Callum a lift home, but he declined as he didn't think that his mam would let him, so Hayes drove slowly beside him and made sure he got home safely.

When asked if Callum knew who it was helping him, he replied: "No, not really, until he pulled away in the big fancy car, that's when I realised."

END_OF_DOCUMENT_TOKEN_TO_BE_REPLACED

But the kind gestures didn't stop there.

Hayes sent on an authentic Celtic jersey that he had worn in a match, along with a note which read: "Dear Callum, don't ever let the boys from school get you down. Bullies aren't worth your time. If you ever need anything at all, I'm only five minutes up the road. Johnny."

Callum's reaction is fantastic, have a look for yourself:

Watch: Young Rangers fan thanks @CelticFC star Johnny Hayes after he rescued him from a bully gang

When asked if he's going to change allegiances from Rangers to Celtic following this incident, he said: "Maybe".

We don't blame him.

popular
5 years ago, Hollywood took a massive gamble on a huge sequel... and lost big time
Netflix has just added 12 very big movies to their library
One of the most underrated crime thrillers of recent years is among the movies on TV tonight
Tom Hardy set to play Hannibal Lecter-type serial killer in new series
Netflix backtracks on anti-password sharing measures following user outcry
Guy Ritchie's new war movie looks like it'll be a very emotional watch
The 50 most iconic songs of all time* have been revealed
You may also like
4 years ago
Liam Miller charity match organiser dismisses reports that the GAA have given go-ahead for Páirc Uí Chaoimh
4 years ago
Roy Keane and Paul Scholes among Man Utd legends coming to play in Cork for Liam Miller tribute match
4 years ago
Images of Celtic's new away kit have been leaked and the badge is completely different
4 years ago
WATCH: Soccer Republic's tribute to Liam Miller is absolutely heartbreaking
5 years ago
Celtic are coming to Dublin to play Shamrock Rovers this summer
5 years ago
Irish punter scores a massive, winning accumulator by spelling out 'C-E-L-T-I-C'
Next Page