A master of the dark arts.

There was a point where José Mourinho was seen as one of the best managers in world football, if not the best.

On the pitch, his teams destroyed the opposition, completely denying them any chance of winning the game. Hell, his Chelsea team once went an entire Premier League season only conceding 13 goals. That's insane. 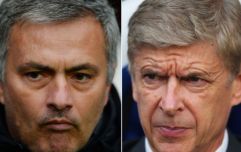 END_OF_DOCUMENT_TOKEN_TO_BE_REPLACED

And off the pitch, he lived inside the other manager's heads, regularly getting the better of them before his men even stepped foot on a football pitch.

And although his talents appear to have wavered, based on his recent stint as Manchester United manager, he is still pure box-office entertainment at press conferences.

United fans may have been sick of the constant excuse making that he did after a game, but there was often a "hidden message" that he would try to convey when he spoke out.

He explained this to Andy Gray and Richard Keys as he analysed the Chelsea vs Arsenal game on Saturday evening: 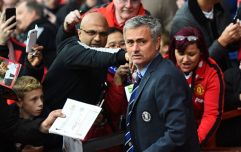 END_OF_DOCUMENT_TOKEN_TO_BE_REPLACED

He said that: "When I don't have a top communication director, then I have to go by myself, and then probably, I can make some mistakes that I shouldn't make when I am a top manager in the world, and the top manager of a top club."

When asked by Keys if there is always a subtext to what "The Special One" says, he replied: "Yes."

popular
Prince George reportedly told classmate "my father will be King so you better watch out"
Two new 24-hour bus services are coming to Dublin
Jeffrey Dahmer’s dad thinks he knows what’s to blame for son becoming a serial killer
Budget 2023: Cigarettes going up, energy credits announced, child and social welfare increases confirmed
An underseen disaster film is among the movies on TV tonight
QUIZ: Test your knowledge with this Ultimate Friends Character Quiz
CONFIRMED: Renters to benefit from €500 tax credit as part of Budget 2023
You may also like
2 years ago
Netflix has just released a must watch Jose Mourinho documentary
2 years ago
The 6 best things to watch on Netflix this weekend
3 years ago
A Football Spin Special featuring the end for Jose Mourinho, a new start for Paul Pogba and what now for Ed Woodward?
3 years ago
Jose Mourinho has officially left Manchester United
3 years ago
The Football Spin featuring Shaqiri going big, Mourinho thinking small and Roy Keane the influencer
3 years ago
The Football Spin featuring Neymar upsetting Liverpool, Ballybrack’s misdemeanours and Mourinho the gym rat
Next Page