You can't say he's not passionate...

Jürgen Klopp isn't generally known for being shy and retiring.

Whether it's rocking Beatles t-shirts to Liverpool press conferences, getting involved with a sing-song with the fans, engaging in tense post match interviews or celebrating wildly on the touchline, the German knows how to make headlines.

END_OF_DOCUMENT_TOKEN_TO_BE_REPLACED

That last element of Klopp's robust character was out in force on Sunday afternoon as Liverpool began to reach cruise control against West Ham.

Following an early lead thanks to - who else? - Mo Salah, Sadio Mané made it 2-0 with a vaguely contentious finish and Klopp reacted by... well, we're not 100% sure, to be honest.

Hunched forward and determinedly balling both of his fists around his crotch area and seemingly vibrating slightly, Klopp cut quite the bemusing figure. 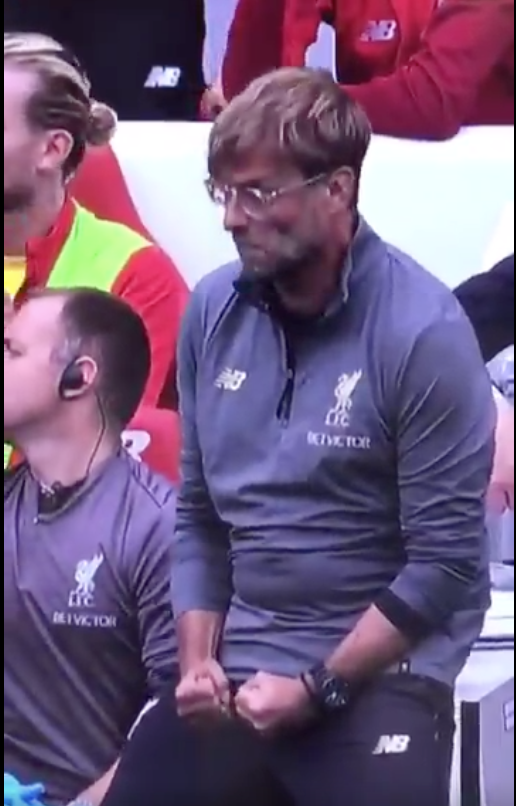 END_OF_DOCUMENT_TOKEN_TO_BE_REPLACED

At time of writing, Liverpool are three up, so expect Klopp to be all smiles come full time, unless I've just put a colossal jinx on the Reds with not much time left.

But why was Jurgen Klopp celebrating so animatedly? He's going to celebrate every goal like that?

I used to find him funny and endearing, even as LFC boss, but it's become cringey and a bit panto now. Not EVERY goal needs an OTT, running fist pump celebration 🙄

So yeah, the Premier League is well and truly back, then.

popular
20 years ago, one of the best sci-fi movies of the 21st century was a box-office bomb
Katherine Ryan says famous TV star is a ‘predator’ and everyone in industry knows
QUIZ: Only the sharpest will get 100% in this General Knowledge test
QUIZ: JOE's Big News Of The Day Quiz #19
The JOE Movie Quiz: Week 181
David Walliams reportedly quits Britain's Got Talent after making offensive comments about contestants
Angle grinder used to steal safe from security van in Dublin
You may also like
2 days ago
The JOE Friday Pub Quiz: Week 322
4 days ago
Japan supporters clean up rubbish following famous win over Germany
4 days ago
ITV football pundit Nadia Nadim heartbroken as mother killed by a truck
4 days ago
Non-league side make approach for 37-year-old free agent after World Cup
4 days ago
FIFA charge Ecuador over fan chants during World Cup opening game
5 days ago
World Cup 2022: All the major action and talking points from Day Three
Next Page