A nice tribute from the Liverpool boss.

Liverpool manager Jurgen Klopp has paid tribute to Sean Cox in his programme notes, ahead of their game against Manchester City on Sunday.

Cox suffered a serious injury when he was assaulted ahead of a Champions League semi-final against Roma in April of 2018.

END_OF_DOCUMENT_TOKEN_TO_BE_REPLACED

He has been undergoing intensive rehabilitation and therapy since the attack.

Writing in the programme, Klopp made special reference to the Cox, writing: "There are a couple of people in the ground today I want to make a special mention of - Seán Cox and his incredible family.

"Seán's story has touched all of us, and although intially the emotions were one of sadness that his life had been so affected purely by coming to support the football team he loves, we now have new feelings when we hear his name mentioned.

"Seán's name and that of his wife Martina and his wider family makes me think of courage, spirit and renewal." 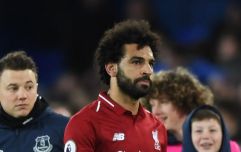 END_OF_DOCUMENT_TOKEN_TO_BE_REPLACED

Klopp continued: "Seán is an inspirational figure in this club's story now. To know he plans to come back to Anfield to support this club once more brings perspective to many things, both in football and in life.

"I hope all of us here today, whatever colours we wear, do him proud in how we approach this occasion."

popular
Budget 2023: Cigarettes going up, energy credits announced, child and social welfare increases confirmed
Two new 24-hour bus services are coming to Dublin
CONFIRMED: Renters to benefit from €500 tax credit as part of Budget 2023
An underseen disaster film is among the movies on TV tonight
Female child and woman in critical condition after incident in Clare
Female child discovered with serious injuries in Clare
Jeffrey Dahmer’s dad thinks he knows what’s to blame for son becoming a serial killer
You may also like
2 years ago
Jurgen Klopp sends brilliant letter to 10-year-old Manchester United fan from Donegal asking him to stop winning
3 years ago
The Football Spin on the agonies in store for Liverpool and Jurgen Klopp in the title race
3 years ago
The Football Spin on another giant leap for Declan Rice, why he should play for Liverpool and the Marcelo Bielsa culture war
3 years ago
The Football Spin on Alisson saving Liverpool, Spurs getting all Spursy and the abuse of Raheem Sterling in Brexit Britain
4 years ago
Jürgen Klopp's celebration for Liverpool's second goal against West Ham was absolutely bizarre
4 years ago
Sean Cox and his family visited by Jürgen Klopp during Liverpool's trip to Dublin
Next Page