Katie Taylor's breakneck sprint through the pro ranks continued on Saturday night as she battered Germany's Nina Meinke in a world title eliminator.

It's been just over five months since Taylor made her professional debut at Wembley Arena, which she claimed via a third round TKO. 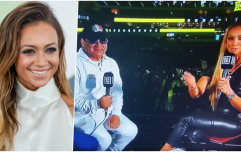 END_OF_DOCUMENT_TOKEN_TO_BE_REPLACED

The 30-year-old returned to Wembley this weekend, although it was the stadium this time that hosted the latest edition of Taylor's showcase of her skills in the shop window as she got the stoppage victory in the seventh round.

Taylor pressed the action against a very game Meinke, who looked much better matched in the early stages compared to Taylor's early opponents.

A familiar speed advantage was telling as the Irishwoman pushed Meinke backwards, reddening the left side of the considerable underdog's face.

Tremendously creative flurries often started with hooks to the body and finished with thudding rights up top as Meinke, a southpaw, struggled to keep up with the breathless pace of the Bray fighter.

An accidental headbutt, not seen by the referee, opened up a cut over Meinke's left eyebrow but there was no sympathy from the London 2012 gold medallist, who continued to pour it on en route to her fifth victory, and third within the distance.

END_OF_DOCUMENT_TOKEN_TO_BE_REPLACED

Credit to Meinke, who continued to answer the bell for each round, but referee Howard Foster saw enough midway through the seventh round.

The victory saw Taylor crowned the WBA female Inter-Continental lightweight champion but it will be world championship gold that she will be eager to get her whirlwind hands on.

The Big Reviewski || JOE · TBR Spotlight: Loki - Episode Three - 'Lamentis'
popular
Micheál Martin defends accidentally calling Leo Varadkar "Taoiseach" multiple times
John McAfee’s Instagram deleted after cryptic 'Q' post following his death
NPHET warns extra three weeks before reopening could make "substantial difference"
REVEALED: The top 10 staycation experiences in Ireland
A BBC documentary on the Peru Two is coming next month
Britney Spears tells court father won't let her remove birth control
Aldi launches new garden collection including massive waterpark, slides and 14ft pools
You may also like
1 month ago
Brawl erupts between Floyd Mayweather and Jake Paul at press conference
9 months ago
Mike Tyson reveals how he's been getting in shape for Roy Jones Jr fight
1 year ago
How boxer Tony Bellew lost a stone and a half after retiring from the ring
2 years ago
Brilliant new Katie Taylor mural unveiled at Dublin bar
2 years ago
Does your body shape really dictate how fit you are?
2 years ago
It looks like Anthony Joshua is the latest victim of the Drake Curse
Next Page