The hype train has screeched past its third stop.

Katie Taylor has just moved to 3-0 as a professional after putting an end to her super-featherweight meeting with Monica Gentili in the fifth round in London.

Taylor, one of the current roster favourites of promoter Eddie Hearn, stormed past her Italian opponent just moments before the heavyweight grudge match between David Haye and Tony Bellew.

Final warm up on the pads for @KatieTaylor ahead of her fight with Monica Gentili up next at @TheO2 . #HayeBellew pic.twitter.com/S44NVmfttW

END_OF_DOCUMENT_TOKEN_TO_BE_REPLACED

Bray's Taylor turns 31 this summer and she's wasting absolutely no time in making a splash in the minds of fight fans.

Taylor, a London 2012 gold medallist, abandoned the amateur scene amid the farcical scenes that marred boxing at Rio 2016 but she's taken to the pro arena like a duck to water.

Third time proved just as charming as her opening pair of fights, with Taylor putting on one of the performances of her career in the O2 Arena.

She came out displaying typical composure and didn't hesitate to set the pace as she set about her opponent by digging thudding hooks to Gentili's body in the opening frame.

@KatieTaylor has every punch in the book! Vicious finish aswell! Pure class 🇮🇪☘️ 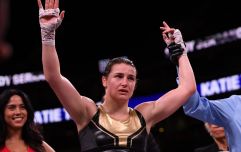 END_OF_DOCUMENT_TOKEN_TO_BE_REPLACED

The second round saw Taylor continue to circle on the outside and pepper away with a glorious mixture of shots to the midsection and head.

There was a marked boost in aggression from Taylor in the third round and, while Gentili deserves all the credit in the world for plodding forward, Taylor was a class above throughout.

The finish was on and it arrived in the penultimate round as she uncorked a furious combination that clearly rocked Gentili.

There was no coming back. 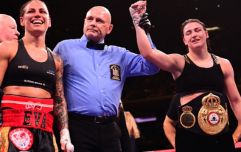 END_OF_DOCUMENT_TOKEN_TO_BE_REPLACED

Taylor made her professional debut last November, when she dispatched Poland's Karina Kopinska in three rounds, but judges were required in her second outing as a pro as she claimed a points victory over Viviane Obenauf in Manchester.

She was slated to fight on the undercard of Gennady Golovkin vs. Danny Jacobs at Madison Square Gardens on March 18th in a monster weekend of boxing in New York City.

A dispute between promoters meant that opportunity fell through but we don't have long to wait to see Taylor again as she is set to fight on the undercard of Anthony Crolla's Manchester clash with Jorge Linares in three weeks' time.

The Big Reviewski || JOE · TBR Spotlight: Loki - Episode Three - 'Lamentis'
popular
John McAfee’s Instagram deleted after cryptic 'Q' post following his death
A BBC documentary on the Peru Two is coming next month
Britney Spears tells court father won't let her remove birth control
Aldi launches new garden collection including massive waterpark, slides and 14ft pools
The Ultimate Robert De Niro Quiz
Limerick teenager arrested as part of international money laundering investigation
The 50 most iconic songs of all time* have been revealed
You may also like
2 years ago
Brilliant new Katie Taylor mural unveiled at Dublin bar
2 years ago
Plans to build a statue of Katie Taylor are gathering pace
2 years ago
Calls are growing for a Katie Taylor statue
2 years ago
Katie Taylor wins fourth professional belt after just two and a half years
2 years ago
Katie is exactly the kind of movie that Notorious should have been
2 years ago
People seriously enjoyed the Katie Taylor documentary on TV last night
Next Page