Khabib Nurmagomedov has threatened to quit the UFC if his teammate is fired following the brawl that took place after UFC 229.

His teammate, Zubaira Tukhugov, was one of the fighters who attacked Conor McGregor after the fight in the early hours of Sunday morning. 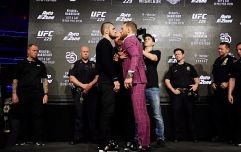 END_OF_DOCUMENT_TOKEN_TO_BE_REPLACED

Khabib has since posted a message on his Instagram page voicing his complaints with the UFC, and the way they have handled the situation so far.

He said: "Why didn't you fire anyone when their team attacked the bus and injured a couple of people? They could have killed someone there, why no one says anything about insulting my homeland, religion, nation, family?

"Why do you have to punish my team, when both teams fought. If you say that I started it, then I do not agree, I finished what he had started.

"In any case, punish me, Zubaira Tukhugov has nothing to do with that." 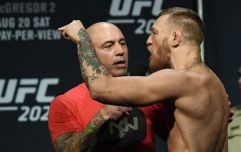 END_OF_DOCUMENT_TOKEN_TO_BE_REPLACED

He then put the blame on Conor McGregor for the brawl, saying: "If you think that I’ll keep silent then you are mistaken. You canceled Zubaira’s fight and you want to dismiss him just because he hit Conor. But don’t forget that it was Conor who had hit my other Brother FIRST, just check the video."

He then vowed to quit if his brother was fired, and explained that he didn't care about whether or not he was paid: "If you decide to fire him, you should know that you’ll lose me too.

"We never give up on our brothers in Russia and I will go to the end for my Brother. If you still decide to fire him, don’t forget to send me my broken contract, otherwise I'll break it myself.

"And one more thing, you can keep my money that you are withholding. You are pretty busy with that, I hope it won’t get stuck in your throat. We have defended our honor and this is the most important thing. We intend to go to the end."

The controversy goes on...

popular
The JOE Friday Pub Quiz: Week 308
Infant dies after being hit by jeep in Roscommon
Pilots fly over destination airport at 37,000 feet because they were both sleeping
Netflix has just added 23 very big movies to its library
Two Irish people arrested in "smuggling event" near Miami
Multiple fatalities after planes collide mid-air over California airport
One of 2022’s best hidden-gem comedy series is available to stream
You may also like
3 years ago
WATCH: Khabib Nurmagomedov and his father meet with Vladimir Putin following victory at UFC 229
3 years ago
Conor McGregor given one month medical suspension following UFC 229 defeat
3 years ago
Las Vegas Police Department release statement following scenes of fans fighting after UFC 229
3 years ago
John Kavanagh responds to Khabib's teammates attacking Conor McGregor at UFC 229
3 years ago
"We lost the match but won the battle," says Conor McGregor after UFC 229 defeat
3 years ago
WATCH: Khabib teammate who slapped Conor McGregor after fight speaks out
Next Page