ITV will show one La Liga game per week for the rest of the season, it has been confirmed.

Starting with this Sunday's game between Levante and Real Madrid - the first ever La Liga match to be screened on free-to-air television in the UK and Ireland - several high profile matches will be shown on ITV4 from now until the end of the 2018/19 season.

END_OF_DOCUMENT_TOKEN_TO_BE_REPLACED

They will also show weekly highlights as part of their deal.

Despite this new agreement, Eleven Sports remains the only place to watch all available LaLiga matches live in the UK and Ireland.

ITV will also not have first choice on games, and so will not be screening next month's El Clasico, as some reports originally claimed.

As well as the deal with ITV, La Liga's new broadcast partner Premier Sports is to offer four matches per round via its linear pay-TV channel. 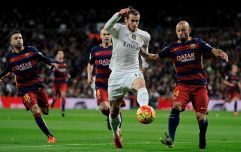 END_OF_DOCUMENT_TOKEN_TO_BE_REPLACED

This is available on Sky and Virgin TV platforms.

“This is a fantastic moment for La Liga in the UK and Ireland," said Javier Tebas, La Liga President.

"The best league in the world will be available to more fans than ever before.

"We are delighted to welcome Premier Sports and ITV Sport to our broadcaster stable in the UK and Ireland which already includes Eleven Sports.

"We are reaching the exciting conclusion to the season and millions of viewers will be able to enjoy the best teams and players in the world, as well as the passion and drama of La Liga.

popular
Katherine Ryan says famous TV star is a ‘predator’ and everyone in industry knows
20 years ago, one of the best sci-fi movies of the 21st century was a box-office bomb
QUIZ: Only the sharpest will get 100% in this General Knowledge test
QUIZ: JOE's Big News Of The Day Quiz #19
The JOE Movie Quiz: Week 181
The JOE Friday Pub Quiz: Week 322
David Walliams reportedly quits Britain's Got Talent after making offensive comments about contestants
You may also like
1 year ago
Five football documentaries to watch to kill time before the new Premier League season
3 years ago
ITV have announced they will broadcast La Liga games every week this season
7 years ago
Barcelona win La Liga title after beating Atletico Madrid 1-0
7 years ago
This Luis Suarez dummy assist against Espanyol is glorious
7 years ago
Video: Cristiano Ronaldo scores five as Real Madrid beat Granada 9-1
7 years ago
La Liga president warns that Messi and Ronaldo could move to England
Next Page