Waterford and Limerick are due to meet at the RSC in Waterford this evening.

Bookmakers Paddy Power and BoyleSports have suspended betting on an Airtricity League clash between Waterford and Limerick on Friday evening due to unusual betting activity in the run-up to the game. 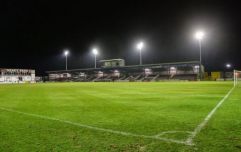 END_OF_DOCUMENT_TOKEN_TO_BE_REPLACED

Paddy Power has confirmed to JOE that betting has been suspended on the encounter, while BoyleSports has taken similar measures.

The game is due to kick-off in Waterford at 7.45pm. Limerick are currently placed second bottom of the Airtricity Premier League and will face Finn Harps in a play-off game to see if they will face relegation from the division

Waterford, on the other hand, will finish the league in fourth place regardless of the result on Friday evening.

JOE has contacted the FAI for comment and is awaiting a response.

popular
The cast and director of Fast & Furious 9 discuss setting a sequel in Ireland
Female personal trainer shares the creepy messages she receives from men on social media
Dublin cyclist says he "could've died" after being pushed into ditch
This Time with Alan Partridge series two confirmed for end of April
What Netflix’s Seaspiracy gets wrong about fishing, according to a marine biologist
The 50 most iconic songs of all time* have been revealed
You can now get a life-size inflatable pub for your back garden
You may also like
1 year ago
Gardaí seize goods in League of Ireland match fixing investigation
2 years ago
It just got MUCH easier to watch goals and highlights from the League of Ireland
2 years ago
League of Ireland players pay tribute to young Bohs fan who sadly passed away
2 years ago
Louth will be getting a brand new 3,000 seater football stadium
2 years ago
Prepare to read the most 'League of Ireland' story you'll see this year
2 years ago
WATCH: Shamrock Rovers fans celebrate crucial Europa League qualifier goal
Next Page