Lions Pic of the Day: Warren Gatland should stay well away from these naked BOD fans from Portumna

Irish rugby fans showed their support for Brian O’Driscoll in a number of ways after his controversial axing from the Lions squad, but this is without a doubt the most disturbing example we’ve seen yet.

After Warren Gatland saw fit to drop our greatest ever rugby player for what would have been his last appearance for the Lions at the weekend, rugby fans across the country were up in arms and support was offered for the great man through, for example, a Justice for BOD Facebook page that has garnered over 100,000 likes so far and the #justiceforbod hashtag on Twitter.

A few rugby fans from Portumna went even further to illustrate their solidarity with O’Driscoll and their antipathy towards Gatland in a local pub in the town, An Caisleán, yesterday, by, well, getting a little naked. 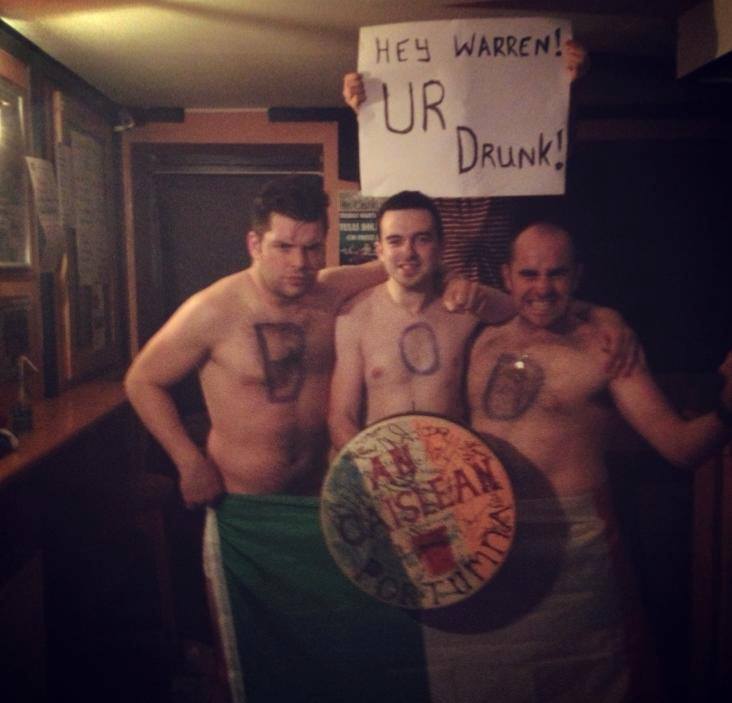 END_OF_DOCUMENT_TOKEN_TO_BE_REPLACED

Thankfully, the lads had an Irish flag and a bodhrán to preserve their dignity and although it’s a little disturbing, and although some would say that the letters across their chest read more like ‘BOO’ than ‘BOD’, they certainly get their message across loud and clear.

Hat-tip to Kevin Hayes for sending this one into us on Facebook. Kevin is now in with a shot of winning €250 by the end of the month.

popular
RTÉ tries to solve Michael Collins murder in new documentary
QUIZ: Can you get top marks in this short but tricky Irish geography quiz?
4-year-old girl killed in Sligo caravan park named as Alice Dunleavy
Two long-thought-dead Marvel projects appear to be in the works
QUIZ: Can you score 12/15 in this difficult General Knowledge Quiz?
Family of Ashling Murphy share heartbreaking tribute at Fleadh Cheoil
QUIZ: Can you name all the counties in Ireland with an ‘N’ in their name?
You may also like
4 months ago
Scottish Parliament official dies during rugby game in Dublin
5 months ago
Every Guinness fan needs to try these brand new experimental beers
6 months ago
"Samaritans saved my life" - Brent Pope praised for honest interview on Tommy Tiernan Show
1 year ago
Four Irish players propelled into Lions debate after England hiding
1 year ago
Craig Casey and Johnny Sexton combination backed for Italy clash
1 year ago
Defence grows for Billy Burns after one of the roughest days of his rugby career
Next Page