Dan Lydiate keeping up to speed with all his agricultural news Down Under while the youngest member of the touring party celebrates his 21st.

It has been a big week for Welsh flanker Dan Lydiate. After narrowly missing out to Tom Croft for the number six jersey in Brisbane, he came off the bench to earn his first Test cap to put his injury troubles of 2013 firmly behind him. Now in the absence of Geoff Parling he has been given the honour of captaining the midweek side against the Melbourne Rebels tomorrow and Paul O’Connell has decided to shed more light on the tackling machine.

END_OF_DOCUMENT_TOKEN_TO_BE_REPLACED

O’Connell has been ruled out of the tour after fracturing his arm and while we could have forgiven him for being a bit down in the dumps, he was showing that his mood is still upbeat. Even if it is at the expense of the Welsh blindside flanker.

John Hayes was one of the most celebrated farmers in Irish rugby, while the Welsh have always been proud of their agricultural roots, with Lydiate now carrying on that tradition.

The youngest member of the Lions squad celebrated his 21st birthday today in camp and Stuart Hogg, along with his trusty companion BIL, were indulging in no more than some chocolate cake. 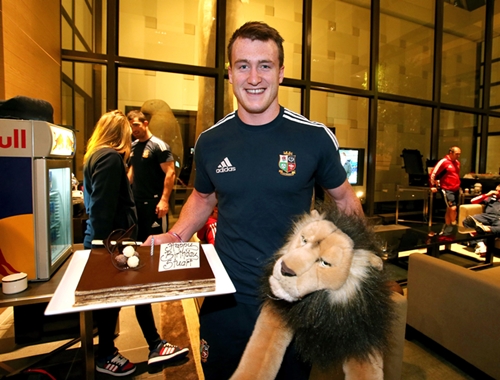 END_OF_DOCUMENT_TOKEN_TO_BE_REPLACED

The Scottish back has justified his place in the squad with some assured performances at both full-back and out-half and we would expect him to feature in more Lions tours in the future if he continues this rate of progression.

He may indulge in more birthday celebrations - Jagerbombs - when the tour is over and if it was birthday bumps he was looking for, he was mixing in the right company. 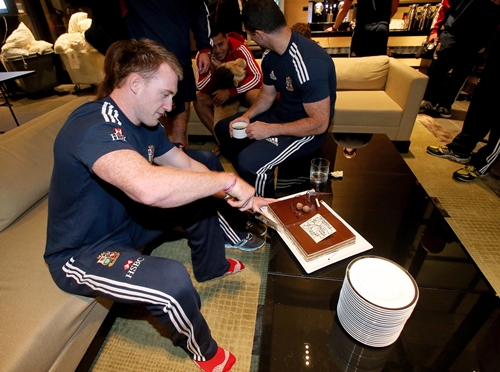 Lions coverage on JOE brought to you in association with Kellogg’s, official cereal & snack provider to the IRFU.

House of Rugby Ireland · Ireland's feel-good win, Casey's initiation song, scrapping Sexton and Scott Williams interview
popular
The JOE Movie Quiz: Week 91
Bank of Ireland to close 103 branches across Ireland and Northern Ireland
Chadwick Boseman's wife accepts Golden Globe award on his behalf
QUIZ: Can you name all of these characters from The Rugrats?
The JOE Movie Quiz: Week 90
The JOE Friday Pub Quiz: Week 232
Woman receives death threats after posing naked inside dead horse
You may also like
1 month ago
John Cooney comes to defence of JJ Hanrahan after kicking criticism
1 month ago
Cardiff conversation that proved Paul O'Connell always put the team first
1 month ago
Ian Keatley on Ronan O'Gara's deadpan advice and his most treasured Munster jersey
2 months ago
Springboks legend must have the greatest jersey swap collection in rugby
2 months ago
'Players, after games, are reading the most toxic stuff being written'
3 months ago
Johnny Sexton made a class post-match gesture after Ireland's win over Wales
Next Page