LISTEN: Ronan O'Gara dismisses talk that he snubbed the Queen as "complete nonsense"

A lot was made about the photo in the press at the time but O'Gara is keen to set the record straight once and for all.

Following Ireland's Grand Slam success back in 2009, the Irish Rugby team had a reception at Stormont where they meet the Queen of England.

During the reception, the team were introduced to the Queen, and this infamous photo was taken, which some people misconstrued as ROG snubbing the Queen. 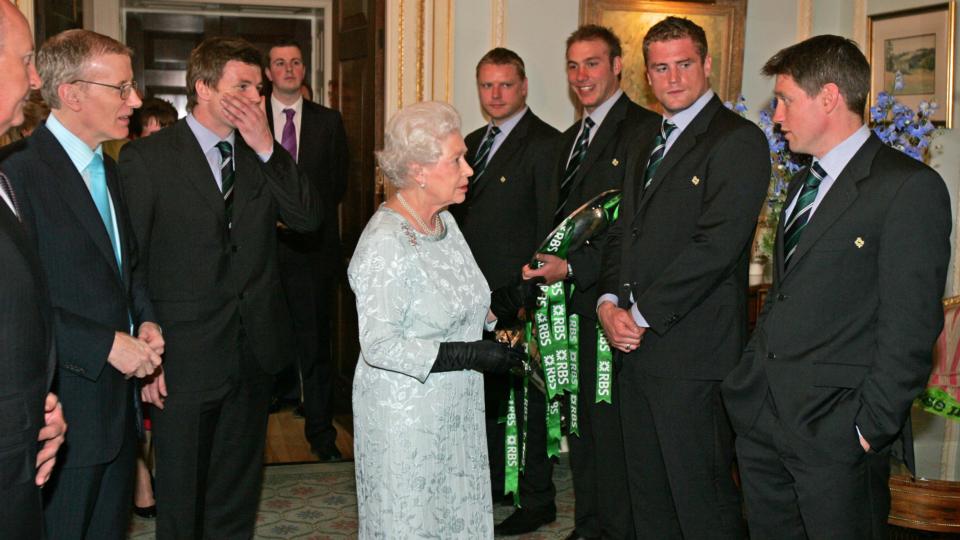 But as the former Munster legend says on An Irishman Abroad, the hugely popular podcast by Jarlath Regan, that's most certainly not the case.

"The situation in terms of the Queen was horrendous, I addressed this in the book but it hasn't really been put out there, people take out of it what they want," O'Gara said.

END_OF_DOCUMENT_TOKEN_TO_BE_REPLACED

"I was in the line to be introduced, my hands were a little bit sweaty, I put them into my pockets to clean them. But the angle taken... you couldn't have staged it because Brian looks like he's in disbelief with what's   going on here. But that's a snapshot, living that live in the seconds, there was no moment for anything."

You can listen to the clip below...

You can listen to the full episode of An Irishman Abroad below also where O'Gara discusses Munster, Ireland, Kidney, Bataclan terror attacks, Sexton and Zebo. You can also check out Jarlath's website here.


popular
Take some time to watch the music video for James Blunt's 'Monsters'
The JOE Movie Quiz: Week 38
Barry Keoghan has never looked scarier than he does in Calm With Horses
Heavy snow impacts flight schedule at Knock Airport
QUIZ: Name the missing word from these famous Dumb and Dumber quotes
Chinese student who travelled from Wuhan in isolation in Waterford as precautionary measure
Edge makes electrifying return at WWE Royal Rumble
You may also like
2 months ago
SportsJOE presents The Great Debate
3 months ago
WATCH: Players from Cavan RFC give our Ice Bath Quiz a go
3 months ago
The perfect night out for rugby fans looking to get over that World Cup heartache
3 months ago
Omniplex cinemas around Ireland to screen Ireland v New Zealand live
3 months ago
WATCH: Players from Loughrea RFC have a go at the Ice Bath Quiz
3 months ago
WATCH: Balbriggan RFC players take the Ice Bath Quiz
Next Page