Looking back: 13 big talking points from the 2014 World Cup

It seems like an age since the Greatest Show on Earth aka the World Cup in Brazil.

We're trying not to get carried away here in JOE Towers but this years World Cup was arguably on of the greatest in its history as it had everything. Amazing goals, drama, huge controversy, memorable moments and also the capitulation of the host nation against the eventual champions, Germany.

The end/start of the new year is a time for reflection so we decided to revisit some of the major talking points from the greatest show on Earth.

END_OF_DOCUMENT_TOKEN_TO_BE_REPLACED

Coming into the tournament as reigning World and European champions, the Spanish were many people's favourites, but little did we know that they wouldn't even get out of the group.

Defeats to Holland and Chile meant that Spain's win over Australia was effectively a dead rubber match as the tiki-taka kings made a meek exit from the tournament. Many blamed it on an ageing squad, but was that the only problem?

They were hammered by the Dutch in their opening group game and of course there was THIS goal:

END_OF_DOCUMENT_TOKEN_TO_BE_REPLACED

2. The pressure on Lionel Messi

Lauded by many as the greatest player of all time, some of his detractors said he needed a big World Cup for Argentina to help him cement his place in the pantheon of the greats. He managed to score four goals in total at the tournament, but by his incredibly high standards, some felt that he still wasn't firing on all cylinders.

Some of his goals though, wow...

END_OF_DOCUMENT_TOKEN_TO_BE_REPLACED

3. The rise of a new global superstar in James Rodriguez

The Colombian international finished as top scorer at the World Cup and despite already moving from Porto to Monaco for a huge transfer fee, it was the World Cup which gave him the platform to perform and boy did he perform. He was sensational for an excellent Colombian team that was missing the talents of goal poacher Radamel Falcao.

This goal against Uruguay was the best of the tournament and the stuff that dreams are made of:

The former Liverpool striker came into the tournament hoping to build on his fearsome reputation as one of the top strikers in the world. He did contribute with some brilliant finishing, but his reputation will be forever tarnished by another biting incident involving Giorgio Chiellini when Uruguay met Italy.

Here he is at his very best against England:

Here is THAT incident:

5. Neymar carried the hopes of a nation:

He was Brazil's big hope and he carried that pressure into the tournament, but to his credit, he seemed to take it in his stride. Brazil were ultimately disappointing, but Neymar was very impressive before getting injured against Colombia in the quarter-finals.

Brazil went into the semi-final against Germany without their talisman and we all know what happened next.

6. Mexico's manager Miguel Herrera was easily the most entertaining manager to watch.

Mexico qualified for the knock-out stages by finishing second to Brazil in their group and won a lot of admirers along the way. This was mainly due to the infectious and energetic actions of their manager Miguel Herrera on the touchline.

The manager is very much a 'wear your heart on the sleeve' type of guy and when Mexico scored, he did little to hide his emotions. Check out this celebration after El Tri sealed their passage into the last 16 against Croatia:

The Manchester United manager showed that he is not shy when it comes to making big calls during the heat of battle. In the Oranje's quarter-final meeting with surprise package Costa Rica, the match was heading for penalties with both sides locked at 0-0.

Van Gaal substituted his goalkeeper Jasper Cillessen and brought on Newcastle's Tim Krul who he felt was better at saving penalties. The move was thoroughly vindicated as Krul went on to save two penalties which sent the Dutch into the semi-final.

8. Goal-line technology being used to great and ridiculous effect

We've all championed the merits of having goal-line technology and it was refreshing to see that this was the first World Cup to use it. There were no Frank Lampard shots that were three feet over the line and not being awarded as goals though.

Our only gripe was that the TV directors felt the need to show us the graphic every single time to prove the ball had not crossed the line. Even when it was blindingly obvious that the ball had not gone even near the line. However, the pluses far outweigh the negatives here.

9. The goals, the glorious goals

There were some absolute crackers scored in Brazil at the World Cup from Robin van Persie's amazing diving header to Tim Cahill's outrageously brilliant volley for Australia against Holland. Here is a selection of ten of the best from the tournament:

10. The emergence of the so called 'smaller' nations

Costa Rica had an amazing World Cup. Getting all the way to the quarter-finals with Fulham's Bryan Ruiz inspiring them to dizzying heights, they were only defeated eventually by the Dutch on penalties.

Algeria qualified for the knock-out stages for the first time and went on to give Germany a huge fright in their second round match. They certainly gave them a better match than Brazil did in the semi-final.

It might be a bit rich to say that the US are a lesser nation, but in international football terms, they are still novices. They were fantastic in the World Cup and won many fans along the way succumbing eventually in the second round to Belgium.

11. The complete and utter obliteration of Brazil by Germany in the semi-final

All the signs were there. Brazil were unconvincing at the tournament as they progressed into the semi-final stage and they seemed overly reliant on their talisman Neymar. Unfortunately for them, Neymar was badly injured in the previous match against Colombia. 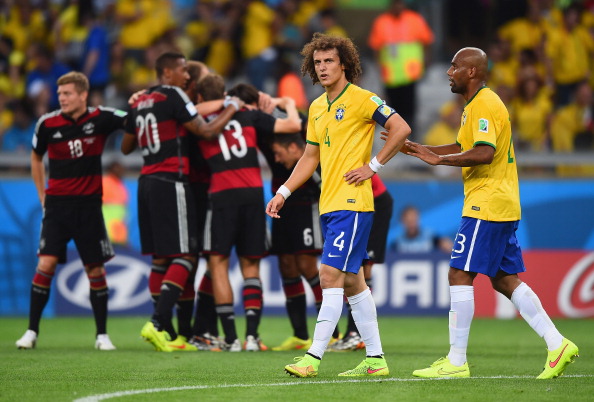 We knew the Germans were good, but this performance against Brazil was as clinical as it was devastating. They simply destroyed Brazil with a display of total efficiency and breath-taking football.

Defensively, the hosts also shot themselves in the foot but the there's no denying that Brazil were swept aside in what was one of the most dramatic results in the history of the World Cup. The 7-1 victory for Germany will live long in the memory while the wounds will run deep for Brazil.

12. Javier Mascherano puts his body on the line like nobody else

Nobody epitomised the sheer will to win the greatest prize in football more than Argentina's Javier Mascherano. The Barcelona player had a fantastic World Cup and he did absolutely everything in his power to drive his country forward.

In the semi-final against the Dutch, he made a goal-saving last minute tackle on Arjen Robben and as a result, he tore his anus. Stretching every sinew and fibre he made the tackle and ended up damaging himself badly. 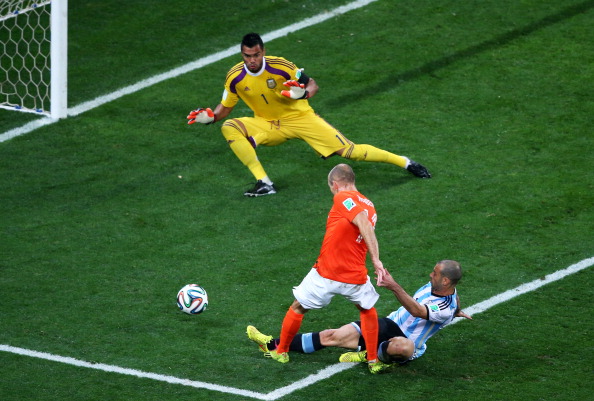 Of course, it didn't put him out of the final though and it goes to prove that some players are harder than others.

13. Mario Götze justifies the hype with the most important goal of his career

After a relatively uninspiring season with Bayern Munich following his hugely controversial move from bitter rivals Borussia Dortmund, many felt that Götze was over-rated and needed to prove himself.

However, upon the greatest stage of all, it was his brilliant goal deep into extra-time which won the tournament for Germany and what a goal it was.

popular
Peter Kay moved to tears on stage while opening his first stand-up tour in 12 years
Simon Cowell concerns fans with appearance as they 'don't recognise him'
Boy, 1, eaten alive by 11-foot crocodile in front of dad on fishing trip
20 years ago, one of the best sci-fi movies of the 21st century was a box-office bomb
U2 drummer Larry Mullen Jr. says band may perform without him in 2023
Netflix has just added 30 big movies to its library
No, we've never heard of the new "best movie ever made" either
You may also like
1 day ago
The JOE Friday Pub Quiz: Week 323
1 week ago
Japan fans explain why they clean up after World Cup matches
1 week ago
The JOE Friday Pub Quiz: Week 322
1 week ago
Japan supporters clean up rubbish following famous win over Germany
1 week ago
ITV football pundit Nadia Nadim heartbroken as mother killed by a truck
1 week ago
Non-league side make approach for 37-year-old free agent after World Cup
Next Page