Speaking to the media after the game, Van Gaal said: "We took those penalties in an incredible way against Costa Rica, It should give you confidence."

END_OF_DOCUMENT_TOKEN_TO_BE_REPLACED

"But the issue is you score the first one and I asked two players to take the first kick before ending up with Vlaar. I thought he was the best player on the pitch so should have a lot of confidence. It just goes to show that it’s not easy scoring in a penalty shoot-out."

*JOE ponders which players refused to step up first* 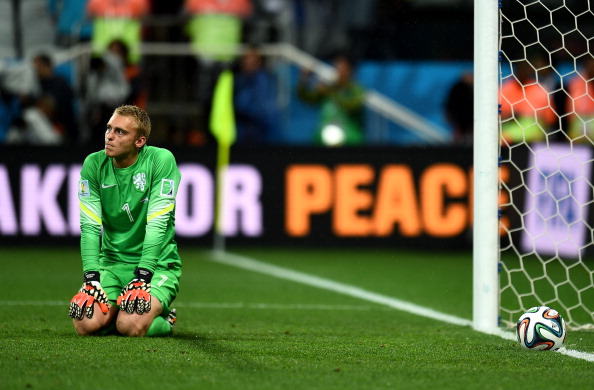 Holland goalkeeper Jaspar Cillessen was critisised for this performance in the shootout and Van Gaal admitted that he would have brought on Tim Krul, the hero in the win over Costa Rica, if he hadn't already made his three substitutions.

Netherlands will now face Brazil in the third place playoff on Saturday evening.

popular
Simon Cowell concerns fans with appearance as they 'don't recognise him'
One of the best movies of the decade has just been added to Netflix
Jonah Hill files petition to legally change his name
Here's the line-up for this week's episode of The Late Late Show
QUIZ: JOE's Big News Of The Day Quiz #23
Woman left confused after DNA test shows child isn't husband's despite her claims that she never cheated
Starbucks worker breaks down in tears after they're scheduled to work 8 hours
You may also like
5 days ago
World Cup 2022 Day Six: All the major action and talking points
5 days ago
Japan fans explain why they clean up after World Cup matches
6 days ago
The JOE Friday Pub Quiz: Week 322
1 week ago
Japan supporters clean up rubbish following famous win over Germany
1 week ago
ITV football pundit Nadia Nadim heartbroken as mother killed by a truck
1 week ago
Non-league side make approach for 37-year-old free agent after World Cup
Next Page