We've all got things that we're insecure about.

We can't imagine there's much Ludacris has to feel insecure about, but nevertheless the video for his latest song Vitamin D features him sporting a set of very fake abs, some very fake pecs and barely any nipples at all.

I mean, it looks sort of convincing, doesn't it?

Naturally, this sent the internet into a bit of a meltdown.

Dare I say that his abs look absolutely........ Ludacris pic.twitter.com/vaUykUsMnL 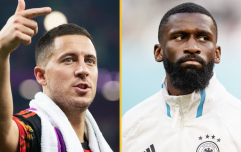 END_OF_DOCUMENT_TOKEN_TO_BE_REPLACED

Of course, it's intentional. Ludacris has made videos in the past with similarly weird body extensions, like in the video for Get Back where he has huge Hulk arms.

He's not just in on the joke, it's his joke. Still, no denying it looks weird as anything.

It's ok they slow RT @chris_oneto: he's supposed to have CGI & he looks at them at the end of the video & sees em gone. It's intentional

Check out the full video for Vitamin D.

popular
Boy seriously injured after alleged dog attack in Wexford
20 years ago, one of the best sci-fi movies of the 21st century was a box-office bomb
Very popular US fast food chain planning to open in Ireland
Katherine Ryan says famous TV star is a ‘predator’ and everyone in industry knows
Surprise frontrunner emerges as potential next James Bond as producers 'love him'
QUIZ: Only the sharpest will get 100% in this General Knowledge test
QUIZ: JOE's Big News Of The Day Quiz #19
You may also like
8 years ago
Video: Emma Stone takes Jimmy Fallon to school in an incredible lip-sync battle
8 years ago
JOE’s Juke Box: Ludacris, ‘Act A Fool’
8 years ago
Tributes pour in for Paul Walker from co-stars and friends
1 week ago
Joe Lycett reveals email to David Beckham following Qatar ambassador backlash
1 week ago
Qatar bans all alcohol at the World Cup
1 week ago
Qatar 'want to ban alcohol' at World Cup stadiums 48 hours before tournament kicks off
Next Page