Here's what it's like to train as a Manchester City player

An inside look at the Premier League champions.

For example, Johan Cruyff's commitment to the 4-3-3 formation is instilled in Barcelona's DNA. Alex Ferguson's insatiable will to win was transferred into every single Manchester United player that wore the red shirt during his reign at Old Trafford.

END_OF_DOCUMENT_TOKEN_TO_BE_REPLACED

On this note, Pep Guardiola's reign at Manchester City can be defined by his meticulous attention to detail and the stunning football that led 'The Citizens' to the 2017/18 Premier League title.

The stats don't lie. During the course of the last campaign, Guardiola's men set new Premier League records for the highest number of points, goals and wins that were ever recorded in a season.

Take a look at some of them below. 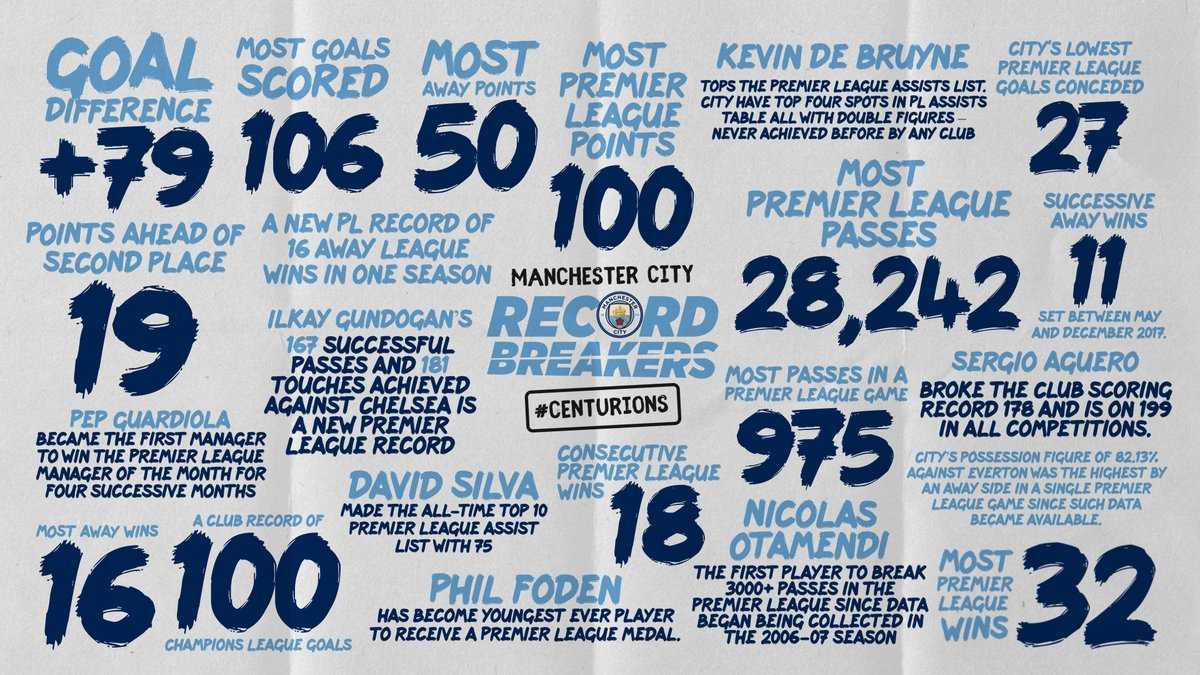 END_OF_DOCUMENT_TOKEN_TO_BE_REPLACED

In the new documentary that airs on Amazon, All or Nothing: Manchester City, football fans will get a unique insight into a record-breaking season for the club, but before the documentary airs, we got a first-hand account at what it's like to train like the Manchester City players.

After being treated to a first-hand look at City's impressive training facilities, video analysis, and coaching techniques, it's clear that Guardiola's approach is paying dividends.

After a brief tour of the changing rooms and pitch at the Etihad Stadium, the real focus was on the training facilities. What's noticeable at the Etihad Campus is the fact that everything seems open and spacious. On these corridors, it's not uncommon to see first-team players walking past academy youngsters and as you would expect, everything is state of the art.

Even in the off season, Mikel Arteta and Joleon Lescott were working with some of the players that aren't on their holidays or the World Cup, but inside the training complex, we were given an insight into the coaching methods and video analysis techniques that the club are using to stay ahead of the curve.

Coaches Andy Smith and Alan Dixon were on hand to walk us through the day-to-day routing of the City players and it's impressive stuff. 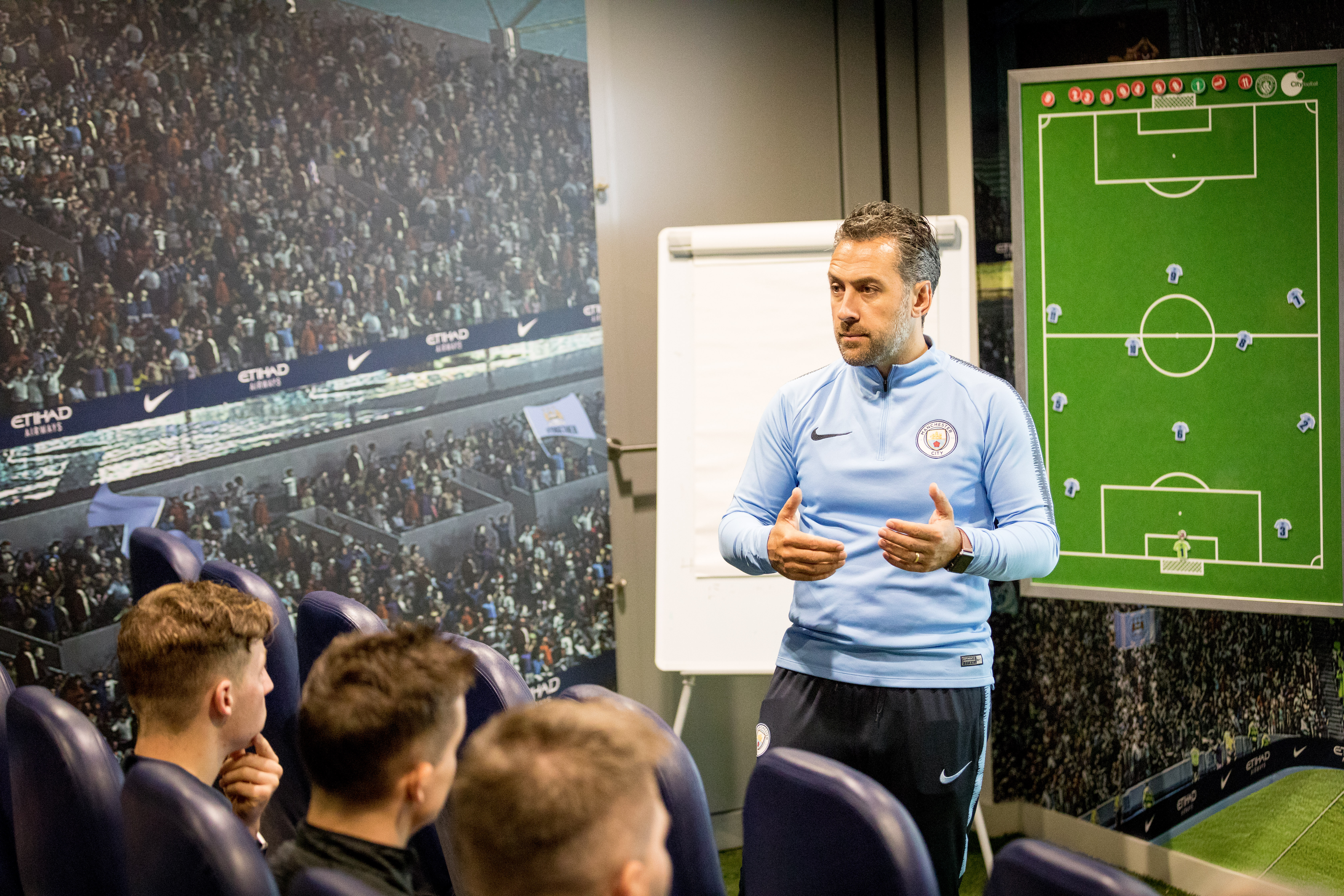 END_OF_DOCUMENT_TOKEN_TO_BE_REPLACED

When it comes to video analysis, the traditional angle that fans view football matches from rarely shows the 22 players that are on the pitch.

Like most other clubs, Man City have embraced technology in a bid to give them an extra edge. As we've come to expect from Guardiola teams, City press the ball with 11 men and from a panoramic angle, it's remarkable to see the entire team shift as a block to compress the space that's higher up the pitch.

From the comfort of our armchairs, this transition appears to be seamless, but it's the product of intense coaching.

City's video analysis allows coaches to instantly identify patterns of play that they can incorporate into their in-game tactics. For example, if a manager suspects that an opposition defender is frequently being pulled out of shape, or is losing his positional sense, the video analyst can spool through the footage, compile it into a quick clip, and instantly transfer it down to the bench for the coaches to watch via an iPad.

Yes, there's still a place for the magnetic white board with pitch markings and checker pieces, but it's far clearer for players to understand things if they're actually seeing it in real time.

Even at youth level, City's coaches wear GoPro cameras so they show players what happened during a particular incident and improve their football education.

In terms of of positional sense and tactical awareness, it's an invaluable tool. What's equally impressive is despite this record-breaking season, it's clear that everyone at the club subscribes to the philosophy that you can learn more from a defeat than a win. 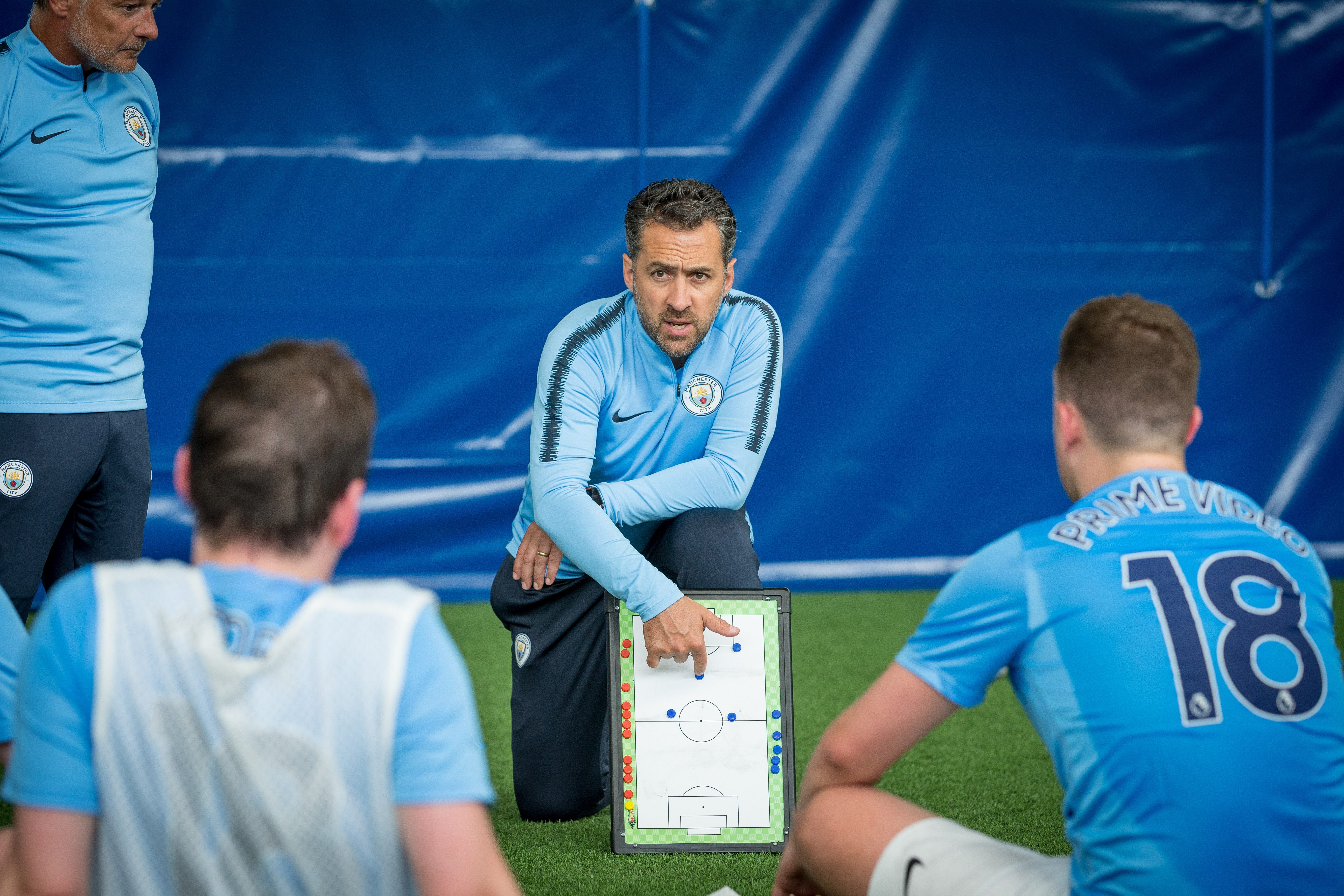 On that note, the Champions League defeat to Liverpool was mentioned and the two coaches inform us that Guardiola and his squad were adamant that they rewatched the footage from both games in an effort to learn from their mistakes.

Aside from this, a short presentation on City's philosophy with regards to ball retention was a welcome inclusion.

Granted, we all know how the Premier league champions like to play. Ederson's distribution qualities ensure that they always build from the back, both central defenders are comfortable on the ball, Mendy and Delph play more like wingers than full-backs, Fernandinho's ability to show and collect the ball from the back-four is pivotal. The Brazilian also provides an extra screen for his defenders when required.

In terms of their attack, City are absolutely devastating, but as knowledgable football fans will know, their intricate passing is based on a simple concept: triangles.

This point is hammered home by the coaches, who reiterate the club's philosophy that any player in possession of the ball must have two options available to pass the ball to. It might sound simple but seeing this in action illustrates the level of detail and precision that Guardiola demands.

This is even incorporated into the day-to-day coaching because it's not uncommon to see City players doing "rondos," or piggy in the middle as it's more commonly known.

It's the simplest training drill but the results can be devastating. Essentially, it sees a circle of players with the ball and one or two in the middle trying to win it back, but it's incorporated on a day basis. Essentially, it's all building towards the one goal, to create enough triangles and patterns of play to dominate possession and pass through the opponent.

This all might sound very basic but when combined together, the level of movement, pace, vision, communication, tactical awareness, bravery to get on the ball, and, most importantly, technique, are a joy to behold. It's what makes Manchester City the best team in the Premier League.

For football fans everywhere, you're about to get an insight into the meticulous detail and planning that defines Pep Guardiola's champions.

All Or Nothing: Manchester City will take viewers on an exclusive journey through the whole of Manchester City's 2017-18 season; from the world-leading training facilities at the City Football Academy, to interviews with the manager, boardroom meetings and other surprise moments across the season. It will include interviews and dressing room action with legendary coach Pep Guardiola as well as the week-on-week stories that unfold within the lives of the players.

The documentary airs on Amazon on Friday 17 August.

popular
Gardaí unveil new Armed Support Unit vehicles to replace older models
Netflix has just added 33 very big movies to its library
The full list of cancelled flights in and out of Dublin Airport on Monday (so far)
One of the greatest crime movies of all time could be getting a sequel
Increase in passenger charges at Dublin Airport may be on the way
Amazon Prime Video has just added 51 big movies to its library
Fish and chips could be removed from Irish menus over rising fuel costs
You may also like
14 hours ago
NOW announces large reduction to its monthly membership prices
16 hours ago
Amazon Prime Video has just added 51 big movies to its library
3 days ago
All of the new releases coming to Netflix, Prime Video, Disney+ and cinemas in July
4 days ago
One of the best sports movies of recent years is now available to stream at home
5 days ago
"The Raid meets Tangled" plus 4 more movies & shows to watch this weekend
5 days ago
Netflix reveals full line-up of new shows and movies arriving in July
Next Page