Mark Travers kept a clean sheet against Tottenham Hotspur on his Premier League debut, and earned himself the Man of the Match award.

Eddie Howe named 19-year-old Mark Travers in the starting eleven to take on Spurs on Saturday morning, and he did not regret it.

The game finished 1-0 to Bournemouth thanks to a late goal from Nathan Ake, but the Maynooth man was instrumental in Bournemouth earning all three points.

END_OF_DOCUMENT_TOKEN_TO_BE_REPLACED

Spurs finished the game with 9 men, as Heung-Min Son and Juan Foyth were both shown straight red cards, but it was Travers who stole the show.

The former Cherry Orchard man joined Bournemouth back in July of 2016 after a successful trial with the club, and has now seriously caught people's eye on his debut.

After the game, Travers spoke about how much the day meant to him, describing the experience as "unbelievable." 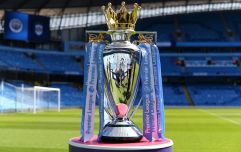 END_OF_DOCUMENT_TOKEN_TO_BE_REPLACED

Travers is also the youngest ever goalkeeper to start a Premier League game since Joe Hart in 2006. A brilliant achievement.

He had previously played for Shamrock Rovers and Lucan United, and most recently featured on the bench for Ireland in the recent Euro 2020 qualifier against Gibraltar.

Fair play to him!

popular
The six Eurovision countries with "irregular voting patterns" have been revealed
Eurovision producers reveal "irregular voting patterns" during Saturday night's final
Work more hours or get a better job to tackle cost of living, says UK Minister
QUIZ: Try out one of our trickiest General Knowledge Quizzes yet
Where will 2023's Eurovision be held if Ukraine can't host?
QUIZ: Can you name all the countries beginning with 'A'?
REVIEW: Van Gogh Dublin is a truly unique cultural experience
You may also like
1 year ago
Here are the five players you need in your Fantasy Football team
2 years ago
Here's how to get tickets to Coca-Cola's last Premier League roadshow
2 years ago
Get ready Dublin! The Coca-Cola Premier League Roadshow is coming your way
2 years ago
COMPETITION: Win the Premier League trip of a lifetime for yourself and 5 mates
4 years ago
David De Gea sent football fans into convulsions with the save of the season
4 years ago
The Premier League is finally getting a winter break
Next Page