Who wins? Nobody. Not them. Not us.

Listen, we get the idea of "smack talk".

Two fighters in the midst of the press tour in the prelude to one of the biggest sporting events in... well... EVER, and before we get to the main event next month, they're forced into a room together and have to try to out-macho each other.

It is all part of the ritual and that is totally fine. Sometimes it is even fun to watch. But there has been something insidiously uncomfortable about the McGregor V Mayweather press conferences, and it all culminated in this tonight in London: 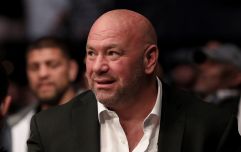 Dana White apologises after being caught slapping his wife on film

END_OF_DOCUMENT_TOKEN_TO_BE_REPLACED

This is following several days of accusing McGregor of using racist taunts, including ordering Mayweather to "Dance for me, boy" and previously describing him as "a Malteaser with eyes".

After days of McGregor fans attempting to defuse the situation, as well as McGregor himself claiming that he isn't racist - by claiming he's "black from the belly button down" (ugh) - it didn't take long for the folks on Twitter to wade in against his remarks each and every time he made them, and the same has happened now for Mayweather's homophobic comment:

Mayweather calls McGregor a ‘faggot’. Not cool. Not cool at all. #MayMacWorldTour

I hope to god that Floyd Mayweather gets his head took off by Conor McGregor for using faggot as an insult in 2017..???? #MayMacWordTour

THERE IT IS! Mayweather drops “faggot” finally. It took four days but there it is.

Each of these guys have millions of fans around the world, and watching them both so casually drop racist and homophobic insults is doing nothing but leaving the biggest dint in the respectability for the sport.

Any black fans of McGregor or LGBTQ fans of Mayweather will all have been left reeling by their comments this week, as they both appear to be in some kind of race-to-the-bottom of respectability, and that is a race that nobody wins. Not them. Not us.

There are practically an infinite number of ways to offend someone without resorting to a specific kind of hate talk, just look at McGregor stirring Mayweather up with his tax talk, or Mayweather going to town on Dana White and the UFC in general. All very entertaining stuff, and none of it offending anyone except those involved.

But bringing in all this other stuff? That's just disappointing to see. And the biggest disappointment? People will still defend it.

There is no defence for casual racism and homophobia, whether it was intentional or just off the cuff or even completely misconstrued. We shouldn't have to defend them for that. We should want them to do, and to BE, better than that.

popular
Harvard study reveals how many times men should ejaculate each month to stay healthy
Woman who died after being mauled to death by eight dogs has been named
Richard Madeley apologises after calling Sam Smith 'he' and bungling guest's pronouns
Prime Video has just added one of the best dramas of the last decade
Omniplex Cinemas are hiring for an awesome and very rare job
Parents left in shock after gorillas start mating in front of kids at zoo
James May condemns Jeremy Clarkson for 'creepy' Meghan Markle column
You may also like
2 months ago
Conor McGregor slammed for Halloween photo of mum in 'black face'
3 years ago
Paddy Holohan has been suspended from Sinn Féin over his claims that "scum" underage girls were having sex with men and blackmailing them
3 years ago
Straight Blast Gym Ireland to open new location in Dublin this month
3 years ago
WATCH: Irish MMA fighter shares lovely video of him and his grandad singing 'Imagine' together
4 years ago
Tony Ferguson explains why he thinks he would beat Conor McGregor
4 years ago
Khabib Nurmagomedov is interested in a fight against Conor McGregor under boxing rules
Next Page