One Conor, trying to meet another.

Conor Taggart is from Inverin in Co. Galway but has been working over in London for the last year and it has now become his second home.

However, like most exiles, he loves to do things that remind him of Ireland so when he heard about the Floyd Mayweather and Conor McGregor press conference in his new hometown, he snapped up tickets quickly.

He wasn't just content with being there though. Oh no, Conor thought that if he made it this far, he was as well off going the whole way to try and meet the fighters.

Here's how he snuck backstage... 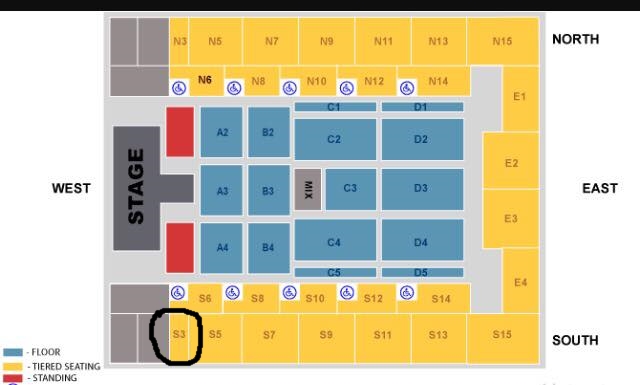 "So I was sitting right up the back next to the curtain in block S3, probably the worst seat in the house," Taggart tells JOE. 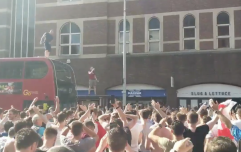 END_OF_DOCUMENT_TOKEN_TO_BE_REPLACED

"Before they came in I peeked under the curtain and saw McGregor getting ready to come out and I thought to myself, I want to get back stage.

"I didn't want to get thrown out so I waited till they were done. I crawled under the curtain, jumped down a number of tiers and ended up landing on the ground floor."

As Taggart's feet touched the ground, the Irish man who has taken the world by storm was stood looking right back at him.

"As I landed McGregor was right in front of me. I patted him on the back and said 'come on Conor' and tried to take a photo but his bodyguards got around him.

"Then, Mayweather arrived and I just acted like I was meant to be there and I just started talking to all their teams."

Taggart can be seen in white, walking with Mayweather's entourage as the fighter leaves the arena in his black Rolls Royce.

As the teams went from the main stage to the back stage, Conor Taggart acted as if he was just one of the guys.

"I met these two guys from Limerick in full trackies and I just stuck with them. A security guard asked one of them 'do you have a pass?' and the guy put on a Dub accent and said 'does it look like I need a pass?'

"Then, we floated around in the arena for ages until it ended. One of the lads tried to get a pic with Mayweather but one of his bodyguards bounced him away, it was gas."

While Conor Taggart didn't get to meet two of the most talked about men in sport, he did manage to get a few snaps from his time backstage... 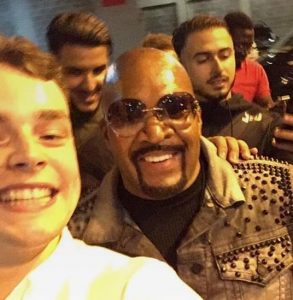 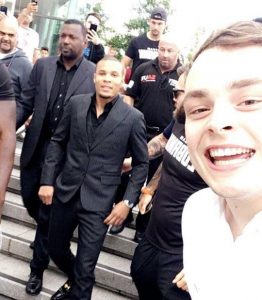 With Chris Eubank Jnr, who was also back stage

Cheers to Conor Taggart for sending this our way. Got a story for JOE? Hit us up on Facebook or Twitter, send it to our WhatsApp number 087-4001102 or mail editorial@JOE.ie.

popular
Conor Mcgregor hit by car ‘at full speed’ while cycling
Parents left in shock after gorillas start mating in front of kids at zoo
Colin Farrell shouldn't win the Oscar this year
Harvard study reveals how many times men should ejaculate each month to stay healthy
DJ accidentally shoots herself in the face with a confetti cannon while performing
The JOE Friday Pub Quiz: Week 331
Netflix has just added one of the best sci-fi movies of recent years
You may also like
3 weeks ago
London named world's best city for 2023 and Dublin makes it into the top 20
4 months ago
WATCH: Foo Fighters give Taylor Hawkins loving send-off at emotional concert
5 months ago
Elderly Irish man stabbed to death on mobility scooter in London
6 months ago
Bus Éireann’s service from Dublin to London will restart this week
8 months ago
ABBA reunite on stage for the first time in four decades
9 months ago
Man arrested on suspicion of murder following stabbing of four people in London
Next Page