WATCH: This funny lip reading video of McGregor vs Mayweather is a must-watch

This had us in stitches.

The McGregor vs Mayweather press conferences are finally over and after four days of insults, shouting and face offs, the countdown is on to 26 August.

When the two fighters square up to each other and the microphones are taken off them, there is one question on the lips of everyone that is watching, 'what are they saying to each other?'

Bad Lip Reading have done their own interpretation of what they think is being exchanged between Conor McGregor and Floyd Mayweather and it is the funniest thing we have seen in a long time. 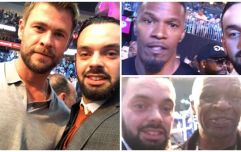 END_OF_DOCUMENT_TOKEN_TO_BE_REPLACED

The video starts with Mayweather taking to the stage and crowing like a bird which he continues to do on and off for the rest of the video. 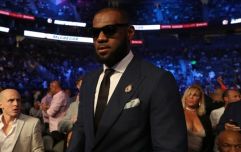 PICS: The crowd at the Mayweather v McGregor fight had more stars than the Milky Way

END_OF_DOCUMENT_TOKEN_TO_BE_REPLACED

As the two fighters get close to each other, McGregor starts saying "your da" before insulting Mayweather on his bad breath.

Mayweather responds by telling McGregor that he has a big head before changing his insult to "you've got a pickle head."

It starts getting completely off topic when Mayweather starts yelling "glue gun" and "pretty snowballs" in the direction of McGregor.

Mayweather splits away from his fighting opponent and goes back up to the podium where he tells the audience that he is going to sing a song called "watch out Ronaldo."

popular
5 years ago, Hollywood took a massive gamble on a huge sequel... and lost big time
Netflix has just added 12 very big movies to their library
One of the most underrated crime thrillers of recent years is among the movies on TV tonight
Mystery over 'dead husband' spotted in Indian restaurant has been solved
QUIZ: JOE's Big News Of The Day Quiz #40
40 years ago, a sci-fi horror with one of the best special effects of all time was released
"He's a changed man" - Woman marries her 'high school bully'
You may also like
5 years ago
There will be an official Irish fan zone in Las Vegas for McGregor v Mayweather this weekend
5 years ago
Katie Taylor will not appear on MayMac undercard, says CEO
5 years ago
Sky Sports promo for McGregor vs Mayweather fight is properly electric
5 years ago
PICS: Irish man sneaked his way backstage for Mayweather-McGregor London press conference
5 years ago
SHOWTIME release statement amid claims Conor McGregor's mic was cut off during Floyd Mayweather press conference
1 month ago
Roy Keane scores winning goal past Micah Richards in ITV v BBC pundits match
Next Page