WATCH: Rory McIlroy is getting mixed reactions for this very self-assured celebration at the Ryder Cup

As it stands, Europe have a solid lead of 8-4 over their US opponents at the 2018 Ryder Cup on the Albatros Course of Le Golf National in Guyancourt, France.

But that doesn't mean there isn't plenty of tension on both sides. 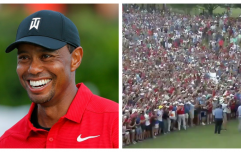 END_OF_DOCUMENT_TOKEN_TO_BE_REPLACED

That much was clear when Irish golfer Rory McIlroy let off steam after a putt that put him and his partner Ian Poulter 2 up on Justin Thomas and Jordan Spieth.

Upon finishing the hole, McIlroy started fist-pumping and turned to the crowd yelling "I can't putt?! I can't putt?!" before pointing to his puffed out chest and saying "I can putt. I can putt."

It was show of bravado that may now have backfired. 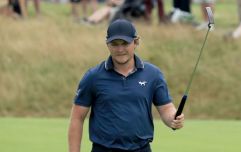 END_OF_DOCUMENT_TOKEN_TO_BE_REPLACED

There's plenty of time left for McIlroy to pull back ahead, but it's safe to say that many social media users are criticising McIlroy's very confident reaction to the earlier putt.

Yes can’t drive the ball either

popular
QUIZ: Can you name all the counties in Ireland without the letter 'E'?
Nearly 100 flights delayed at Dublin Airport on Monday
QUIZ: Can you get top marks in this short but tricky Irish geography quiz?
WhatsApp introduces way to choose who can and can't see you're online
The JOE Friday Pub Quiz: Week 306
RTÉ tries to solve Michael Collins murder in new documentary
Netflix has just added an incredibly tense 97-minute thriller
You may also like
4 years ago
Rory McIlroy to face off against Paris Hilton in The Grand Tour
5 years ago
PIC: Rory McIlroy shares lovely letter sent to him by Arnold Palmer after his first major win
5 years ago
Rory McIlroy's statement on his decision to play a round of golf with Donald Trump
5 years ago
Rory McIlroy proves his soundness as he writes lovely letter to young fan
5 years ago
WATCH: Cheeky young fella gives Rory McIlroy the toughest interview of his life
5 years ago
Grab your friends because this weekend is absolute heaven for sports fans
Next Page