Meet Sean Galvin, the Cork man who will be playing American Football at Croke Park this weekend

The Bandon man will travel home to Ireland when his UCF team play Penn State in Croke Park this weekend.

Sean Galvin is an Irish sportsman who you're going to hear a hell of a lot more about this week and in the foreseeable future. The Bandon native is the kick-off specialist with the University of Central Florida and they take on Penn State in the Croke Park Classic this Saturday.

Sean and his family moved to States back in 2004 and a bit of luck along with some real talent has seen him develop into a fine young player with a big future in American Football. Galvin recently spoke to RedFM's Big Red Bench about how the sporting path he's now on came about. Scroll down for more... 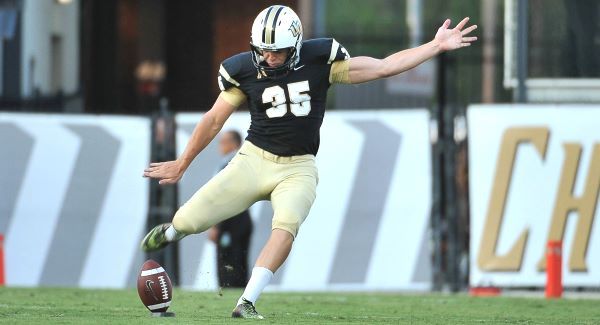 Galvin on... how he started playing American Football in the first place

END_OF_DOCUMENT_TOKEN_TO_BE_REPLACED

"I played soccer my whole life and some GAA with Bandon and the Gaeil Scoil at home and then I came to America and played some more soccer. It was a fluke that I got into American Football in High School, a football came over to me on the pitch one day and I kicked it back and the coach asked me if I wanted to try out for the team.

"I played, everything worked out and I had a bit of luck. Now I'm going home to Ireland to play the biggest game of my life in front of me family."

Galvin on... playing in Croke Park

END_OF_DOCUMENT_TOKEN_TO_BE_REPLACED

"I'm looking forward to coming home and then going to Croke Park is going to be absolutely incredible. I've been dreaming about playing there my whole life, walking onto that pitch is going to be something unreal altogether.

"I think I was supposed to go out in a Cork jersey with a football and hurley but a UCF jersey won't be a bad sight either. Look, playing there was always a dream so getting to play American Football against Penn State should be great, I'm really looking forward to it."

Galvin on... how much he knew about the sport before he moved to the States

END_OF_DOCUMENT_TOKEN_TO_BE_REPLACED

"The first dream was to play GAA for Cork and then when I came to America, it was all about soccer. It's not loved over here though, you don't get the support over here that you'd get if you were playing at home.

"Everyone loves America Football so I said I'd give it a go and kicking/punting was the first thing I thought of because of my soccer background and being a big enough guy (6'3"), that helps with distance so it worked out well." 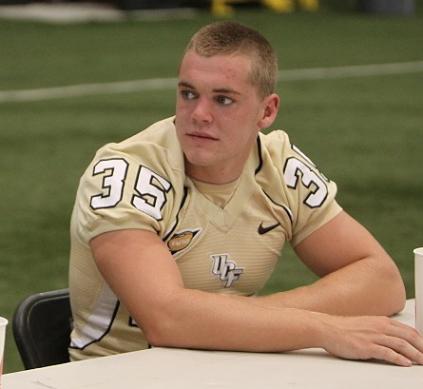 Galvin on... the future and entering the NFL draft

"Yeah that's the plan, hopefully this year goes well for me now because I've been working hard for it. Hopefully I'll get drafted next year, I'll sign up as a free agent somewhere and play a few years in the league."

Galvin on... what Irish people can expect at Croke Park on Saturday

"It's going to be very exciting, every play you don't know what's going too happen. Some of the guys are about 350 pounds so the power and speed of these guys is awesome. It's going to be something really special for people who come along.

"I can't wait, I mean, walking out on that pitch, looking up at the family in the stands, I just can't wait."

popular
Netflix has just added 33 very big movies to its library
The full list of cancelled flights in and out of Dublin Airport on Monday (so far)
Six people dead after mass shooting at Fourth of July parade in Illinois
QUIZ: Can you guess the crisps from the pixelated packet?
One of the coolest movies of recent years is now available to watch at home
QUIZ: It's time for one of our trickiest General Knowledge Quizzes yet
The JOE Movie Quiz: Week 161
You may also like
7 years ago
Video: Galway lad lands slick trampoline trick shot using an American football
7 years ago
Video: Irish people watch lacrosse for the first time and explain why it’s nothing like hurling
7 years ago
Pic: WWE’s Triple H plans to eat this mountain of food over 3 days
7 years ago
Video: College footballer performs 40-inch box jump while holding two 32kg dumbbells
7 years ago
Video: The latest People Are Awesome compilation features some unbelievably talented kids
7 years ago
Deceased coach wills $200 to all of his former players to enjoy a night out
Next Page