It is the first time that the footballer has spoken out on the issue.

Germany and Arsenal midfielder Mesut Özil has issued a statement to explain his May meeting with Turkish president Recep Tayyip Erdogan, the reasons behind it and the fallout in its aftermath.

Özil, compatriot Ilkay Gundogan, and Turkish international Cenk Tosun were photographed meeting the controversial Turkish president at an event in London on 14 May. 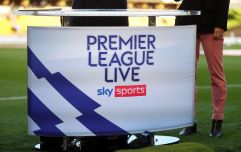 UK Police to visit 1,000 homes in a bid to crack down on illegal streaming

END_OF_DOCUMENT_TOKEN_TO_BE_REPLACED

This meeting would lead to widespread criticism, particularly from the German press.

In the first part of his statement,which was tweeted to his 23 million Twitter followers, Ozil insists that there was no political motivation behind his meeting with Erdogan, who he says he met for the first time in 2010 during a meeting between the Turkish president and German chancellor Angela Merkel.

"The past couple of weeks have given me time to reflect, and time to think over the events of the last few months," begins Özil.

"Consequently, I want to share my thoughts and feelings about what has happened.

END_OF_DOCUMENT_TOKEN_TO_BE_REPLACED

"Like many people, my ancestry traces back to more than one country. Whilst I grew up in Germany, my family background has its roots firmly based in Turkey. I have two hearts, one German and one Turkish.

"During my childhood, my mother taught me to always be respectful and to never forget where I came from, and these are still values that I think about to this day.

"In May, I met President Erdogan in London, during a charitable and educational event. We first met in 2010 after he and Angela Merkel watched the Germany vs. Turkey match together in Berlin. Since then, our paths have crossed a lot of times around the globe.

"I'm aware the picture of us caused a huge response in the German media, and whilst some people may accuse me of lying or being deceitful, the picture we took had no political intentions. As I said, my mother has never let me lose sight of my ancestry, heritage and family traditions.

END_OF_DOCUMENT_TOKEN_TO_BE_REPLACED

"For me, having a picture with President Erdogan wasn't about politics or elections, it was about me respecting the highest office of my family's country. My job is a football player and not a politician, and our meeting was not an endorsement of any policies. In fact, we spoke about the same topic that we do every time we have met - football - as he too was a player in his youth.

"Having respect for political office is a view that I'm sure both the Queen and Prime Minister Theresa May share when they too hosted Erdogan in London. Whether it had been the Turkish or the German President - my actions would've been no different."

In the second part of his statement, the third of which is yet to come, Özil criticised the German media for its portrayal of him and using his dual-heritage as a means to criticise him.

"If a newspaper or pundit finds fault in a game I play in, then I can accept this - I'm not a perfect footballer and this often motivates me to work and train harder," he argues.

"But what I can't accept, are German media outlets repeatedly blaming my dual-heritage and a simple picture for a bad World Cup on behalf of an entire squad," he said, referring to widespread criticism he received from both journalists and former internationals in the build up to and the aftermath of Germany's first round exit in Russia.

"Certain German newspapers are using my background and photo with President Erdogan as right-wing propaganda to further their political cause. Why else did they use pictures and headlines with my name as a direct explanation for defeat in Russia?

"What I do find disappointing are the double standards that the media has. Lothar Mathaus (an honorary German national team captain) met with another world leader a few days back, and received almost no media criticism. Despite his role with the DFB (German national team), they have not asked him to publicly explain his actions.

"If the media felt that I should have been left (out) of the World Cup squad, than surely he should be stripped of his honorary captaincy? Does my Turkish heritage make me a more worthy target?"

popular
Spielberg's best movie is among the movies on TV tonight
Netflix has just added one of the funniest shows of the last 10 years
One of the best thrillers of all time is among the movies on TV tonight
Steve-O says he cannot save 'dying' Bam Margera in emotional online post
Missing mother's children 'cried their eyes out' after they were told 'mummy's lost'
Couple decide to live on cruise ship permanently after finding it's cheaper than paying mortgage
Rising temperatures may be cause of increase in dangerous fungal infections
You may also like
3 weeks ago
Ex-Premier League player arrested after being 'found with €4,500 of cocaine' in Dublin
1 year ago
Five football documentaries to watch to kill time before the new Premier League season
2 years ago
Arsenal manager Mikel Arteta tests positive for Covid-19
3 years ago
People of Cork, the Premier League roadshow is coming to town
3 years ago
They're making a cartoon show about Manchester City for some reason
1 month ago
World Cup 2022 Day 18: All the major action and talking points
Next Page