Cork duo Anthony Nash and Patrick Horgan have been threatening to emulate the musical exploits of Simon Zebo and Paddy Jackson while Dick Clerkin’s amazing Championship record is under threat.

It would take a couple of brave men to try and top the incredible display of lip-syncing put on by Irish rugby internationals Paddy Jackson and Simon Zebo while on tour in America recently, but there might be a GAA double act to rival them in the near future if a purported partnership between Cork goalkeeper Anthony Nash and forward Patrick Horgan ever gets off the ground.

END_OF_DOCUMENT_TOKEN_TO_BE_REPLACED

After Nash was spotted copying Jamie Heaslip and warming up while wearing a pair of Beats By Dre headphones before the Rebels’ clash with Clare at the weekend, a Twitter conversation took place between Nash and the official GAA account as to what song he was listening to and who he might ask to join him in a duet if they were to try and top what Zebo and Jackson pulled off. 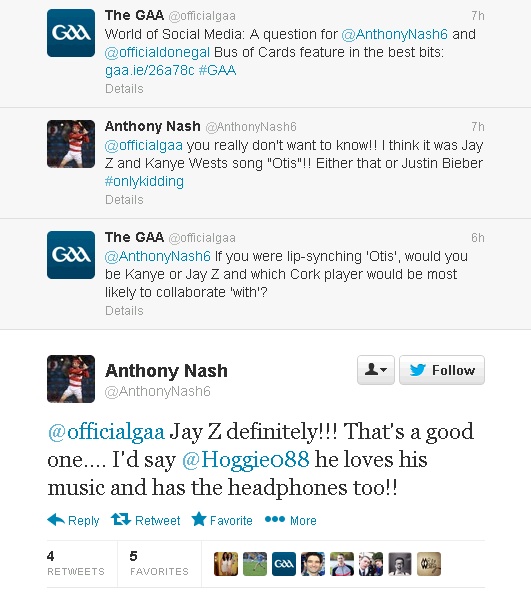 Nash selected Cork sharpshooter Patrick Horgan as his potential partner in mime, which prompted Nash to not only slag off the musical tastes of Nash but of all the residents of Kanturk, criticism which might not go down too well with Aidan Walsh, for example.

@AnthonyNash6 nice one Nash. Ill find all the choons and u take the credit for them. How could u ever hear choons in kanturk haha

Instead of trying to imitate Zebo and Jackson, might we suggest that Horgan (using his nickname Hoggie) and Nash form a multi-county super-group in the same vein as Crosby, Stills, Nash and Young by recruiting Kilkenny’s Jackie Tyrell and Dublin’s Liam Rushe to make up Hoggie, Tyrell, Nash and Rushe?

It’s just us thinking that? Fair enough, it was worth a shot anyway.

END_OF_DOCUMENT_TOKEN_TO_BE_REPLACED

When Henry Shefflin failed to recover in time for Kilkenny’s Leinster Championship clash with Offaly earlier this summer, it brought to an end a remarkable run in which The King had started every single Championship game under Brian Cody’s management dating back to the last year of the last millennium.

Johnny Doyle, meanwhile, hasn’t missed a championship game for club or county since the year 2000 and Dick Clerkin has also been the embodiment of consistency for his county, Monaghan, having started every Championship game for the Farney men since 2003.

Unfortunately, that record is under threat this weekend as he may have to sit out the Ulster semi-final clash with Cavan after breaking a bone in his hand during a league match with his club, Currin, recently.

Clerkin is pulling out all the stops in an effort to be fit and as well as being due to meet with a specialist later this week, he revealed his existing familiarity with hospitals in recent weeks on Twitter earlier today, although it was more notable for a spot of social commentary than any updates he might have given on his condition.

Two weeks ago I was in Mullingar A&E, today I am in St Vincent's Private and it feels like I am in a different country! #2tierstate!

END_OF_DOCUMENT_TOKEN_TO_BE_REPLACED

Given the nature of his injury, we would have thought using Twitter might be a bit difficult for Clerkin at the moment but we’re sure somebody was willing to lend him a hand.

Now if only someone could do likewise for the Monaghan midfielder, literally of course, before the game in Breffni Park on Saturday evening, the record could stay intact after all.

popular
Australian woman stuck with Irish accent after tonsil surgery
QUIZ: How many of these characters from The Simpsons can you name?
Two children, aged 3 and 4, hospitalised after consuming suspected cannabis jellies
9-year-old boy killed by lightning strike while playing football
Assassin's Creed director on why Ireland is the perfect setting for their new game
Alastair Campbell accidentally announces death of The Queen live on GMB
Alan Kelly says Taoiseach and colleagues "damn well destroyed this country" with housing policies
You may also like
7 months ago
Post-match celebrations and a lack of social distancing at certain events put club game on hold
7 months ago
Cork GAA pleads with clubs and supporters “not to engage in celebrations that breach current guidelines”
11 months ago
What's the Bronco test and why it may come up in conversation this week
1 year ago
The Andy Moran GAA Isolation Workout
1 year ago
SuperValu, Centra and the GAA team up on initiative to support elderly people
1 year ago
Meath GAA club confirm adult player has tested positive for coronavirus
Next Page