NIALL QUINN EXCLUSIVE: James McClean was worth every leap of faith

In his latest exclusive column for JOE, Niall Quinn discusses the eventful career of James McClean and why he believes he’s proved well worth the leap of faith Quinn took when signing him for Sunderland.

James McClean is one of those guys who always seems to be just arriving somewhere.

He came to the Premier League relatively late. I think he was 22 when we signed him at Sunderland from Derry City. 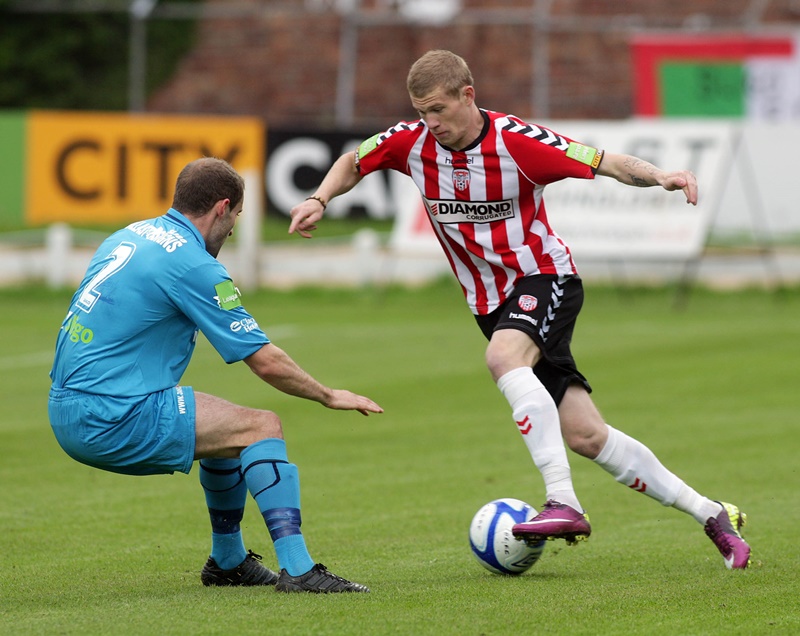 We bought a long shot. He gave us fireworks.

END_OF_DOCUMENT_TOKEN_TO_BE_REPLACED

Bang! Suddenly he had arrived into the reserve team.

Bang! Now he was in the first team.

Bang! He was playing for Ireland.

In Moldova, of all places, he might finally have put his baggage down and announced that he is here to stay. His two goals put Ireland in a very strong position to qualify and if the team gets to Russia in 2018 I believe James will be a leader and a key player.

END_OF_DOCUMENT_TOKEN_TO_BE_REPLACED

Seeing him score a couple of goals told us a lot, not just about his talent, but that potential for leadership. It also gave me a lot of pleasure. Not just because of the kind of person James is, but because a lot of people put a lot of faith in him along the way and more often than not he has repaid them well.

The first leap of faith

The leaps of faith in James started with Bryan ‘Pop’ Robson, a goalscoring hero of the North East who hit his mid-60s a few years ago. Pop left his scouting job at Chelsea, wanting to get back up to his family and his roots in Hexham. Steve Bruce and I gave him the job as chief scout.

Pop came in on the first day and said, ‘Listen, there is a bargain out there that we were recommended to come and watch when I was at Chelsea. A lad called James McClean at Derry City’.

Given the structure at Chelsea and James’s age, Chelsea had decided not to pursue the transfer.

END_OF_DOCUMENT_TOKEN_TO_BE_REPLACED

There were a few other clubs looking at James that summer, including Everton. Steve Bruce and I had never heard of James McClean, let alone seen him play, but it was Pop Robson’s first day on the job, he was enthusiastic and it didn’t seem like the time to knock Pop back. 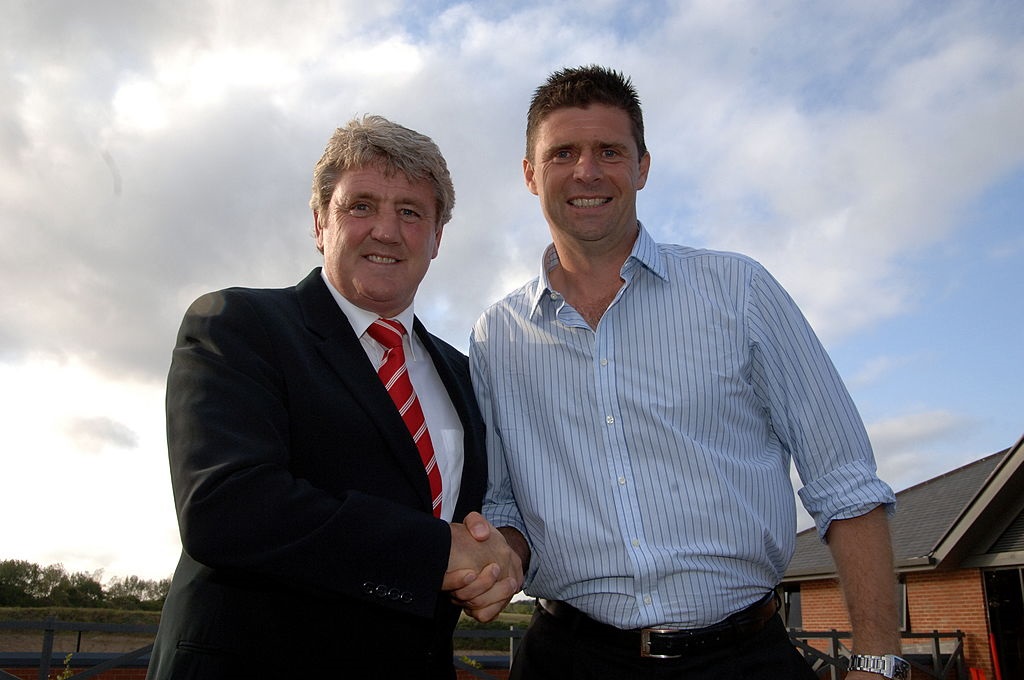 I agreed to approach Sunderland’s owner Ellis Short to get permission to make the signing.

Ellis asked a number of pertinent questions, starting with ‘How many times have you seen him play, Niall?’

‘What else did I know?’ Well, from what I knew of the League of Ireland and the list of players on our radar at the time, James McClean wasn’t near to being on the list but…

Between the jigs and the reels Ellis agreed and we spoke to Derry.

James was playing under the management of Stephen Kenny at Derry and as so many players do under Stephen’s guidance, he had made quick progress.

We held negotiations in Myo’s pub in Castleknock, Dublin when I was back home to see the All-Ireland Football semi-final in 2011. James’s agent Eamonn McLoughlin was always a very likeable guy as agents go, easy to deal with.

All through the deal there was one burning issue that Eamonn pushed for. He wanted me to call the FAI and tell them that James wanted to switch from Northern Ireland to the Republic. 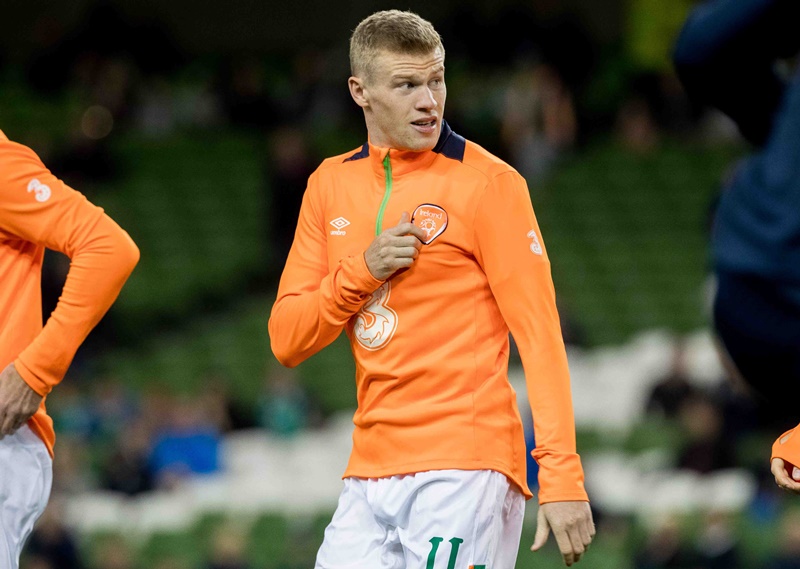 We agreed a fee with further payments if James made the first team and another payment if James played for Ireland.

I spoke to John Delaney at the FAI. I explained how we at Sunderland felt this lad had a chance and asked JD to consider securing him for Trapattoni. John showed faith too and invited James’s parents to the next Irish game in Dublin.

James was different. Everything was new to him but he wasn’t fazed or over-awed. He had a great desire to work on his game and to make it as a player.

When he came we assumed it would take him a year or two to make the first team but he made his mark almost straight away, scoring in a 4–3 win for the development team against Newcastle United.

Steve Bruce took note but Steve moved on not long after that and Martin O’Neill, another Derry man, arrived.

Martin first saw James play for the reserve team in the glamorous yet windswept surroundings of Eppleton Colliery Welfare FC in Durham. Our reserves beat Manchester United’s reserves. 6-3. That was mid-week.

That very weekend James made his first team debut, coming off the bench against Blackburn in Martin’s first game in charge. James turned the game around. We came from behind for a win as many leaps of faith were well-rewarded. 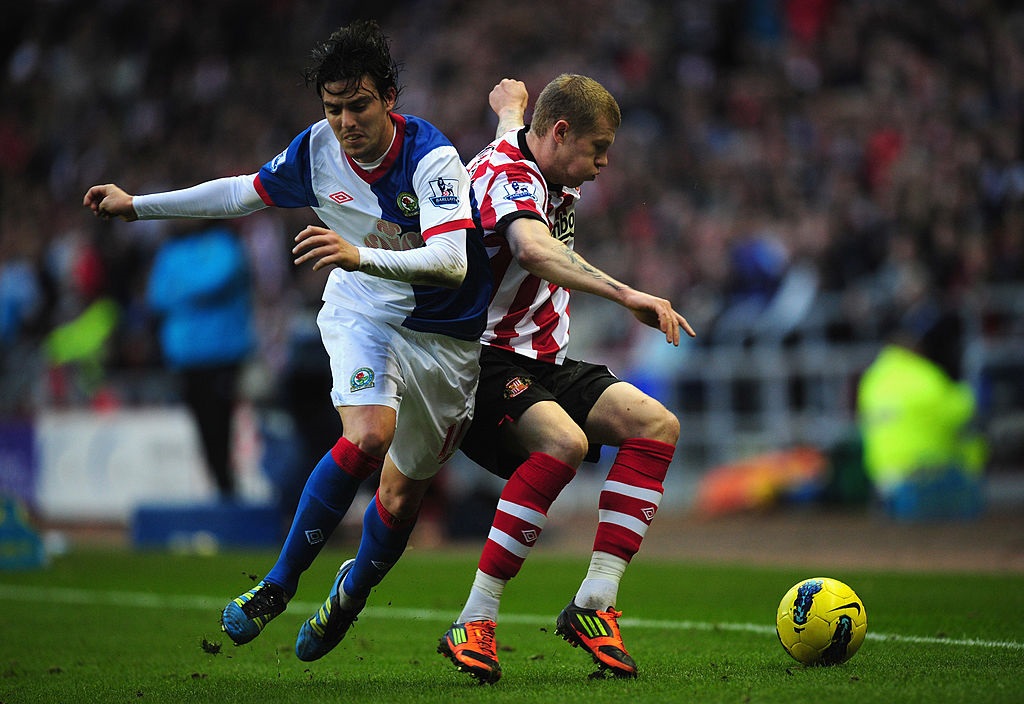 It was as simple as just adding water. Instant folk hero.

It’s a funny thing, but for all the controversies that have followed James McClean since then, he seldom gets the credit for remaining true to who he is.

The worry with a player who makes such rapid progress in the Premier League is that his head will be turned. The quiet lad you signed will be appearing in tabloids smoking a shisha pipe in some night club in Marbella at 4am with a pile of ne’er do well hangers-on who he didn’t know two weeks previously.

When I look at James playing I still view him in those terms. Will he keep it on the rails?

For instance, most young players who make the first team gradually work their way up to having a more respectable car in the players’ car park.

James hadn’t been long in the first team when I was gazing out the window of my office one day to see a massive, gleaming Range Rover type thing pulling in and young James McClean hopping out on the driver’s side.

Martin O’ Neill spotted the vehicle too. You could probably have seen it from the moon. Martin had a quiet word. The car was back in the dealer’s showroom within a day or so.

Even in Moldova yesterday when James hit an awful free kick I found myself looking at him and thinking, ‘Ah James, if you’d spent less time getting yourself decorated with ink in tattoo parlours and more time practising free-kicks that might have gone better for you’. 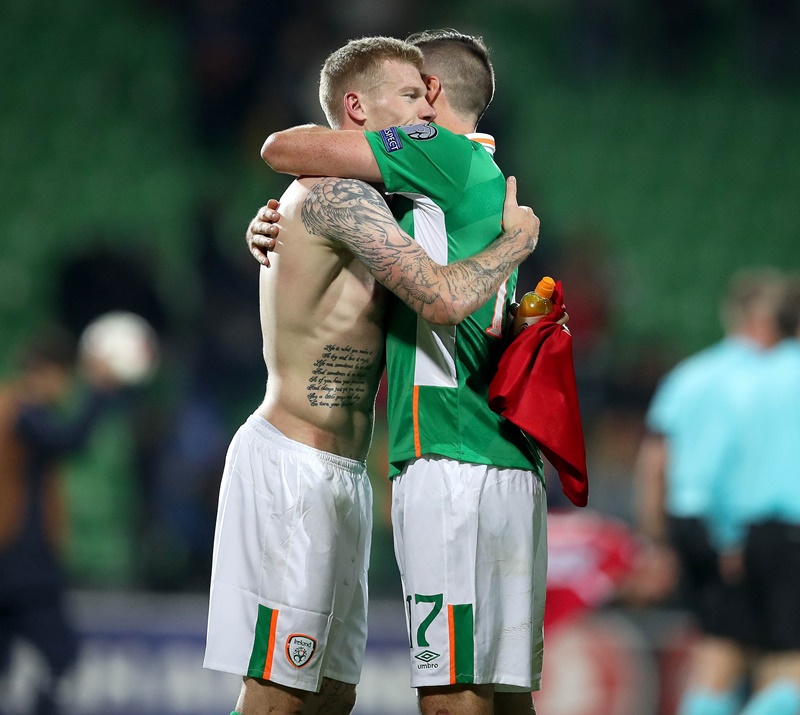 But that’s just the old man in me tut-tutting for the sake of it.

James is one of those characters who wobbles but always rights himself in the end. When Martin left Sunderland, James was gone not too long afterwards.

Wigan came looking for him and he had no problem going there to continue working on his career and to get himself back into the Premier League.

It was a sensible move and it worked out fine for him.

In England he has become a lightning rod for the annual argument over the wearing of the poppy.

First of all, many of us Irish working in England take the path of least resistance when it comes to the poppy. I don’t have strong feelings one way or another and when somebody hands me a poppy to wear on television I put it on rather than draw international heat onto myself like James has.

That is who I am. If I went into a mosque, for instance, I would take my shoes off. I know there are people and keyboard warriors out there who are disappointed or angered by that. I don’t know that many of them would have the strength of character to take the public stand that James has taken, however.

I don’t come from the Creggan estate in Derry and neither do many of the people who are loudest on the issue. I didn’t grow up with the history and politics of Derry. Whether people agree with James McClean or not, it is impossible not to admire him for being true to himself.

He first took his stance at Sunderland. It is said the North East has the highest density of service people per population of anywhere in the UK so it was always going to be a very tough audience.

The stance went down badly and the abuse that followed must have been very hard to take. When James was at Wigan he penned a letter to David Whelan, his chairman, explaining his position. 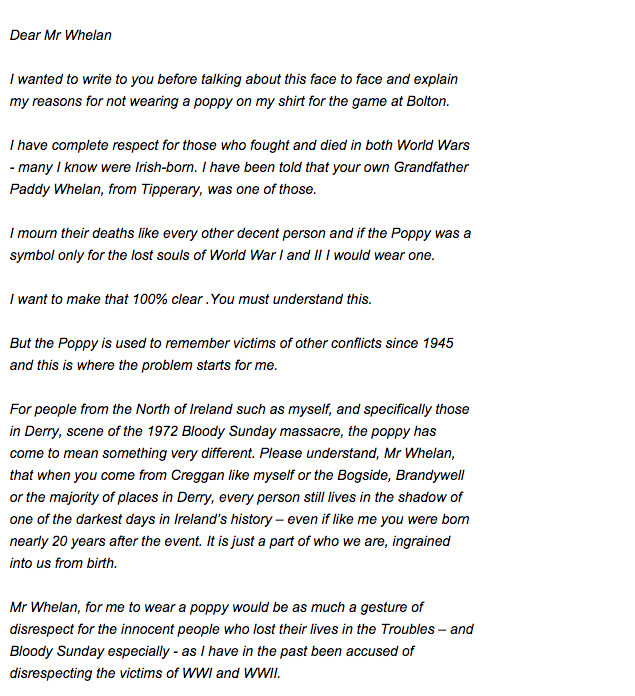 It was eloquent and well-reasoned and more valuable than a thousand hasty tweets. Dave accepted the letter and James’ position and both agreed that the letter should be published in full.

At West Brom, James wrote the same sentiments in a matchday programme before the issue arose again. I think a lot of people saw where James was coming from, both in the literal sense and in understanding that perhaps a lot of what the poppy stands for should be the fight for the right to be different and true to who you are.

Heart on his sleeve

James is 27 now. His beliefs aren’t going to change but if you look at him objectively in a world where so many people are faking it, he is a young man who’d rather wear his heart on his sleeve. He makes mistakes.

After the game in Moldova, for instance, he had a crack off the Irish media.

I would advise him just to respond to people either through what he does on the field or by talking to them one-on-one but I understand his frustrations and I think he’ll learn.

That has been his story so far, always learning, always arriving somewhere new. 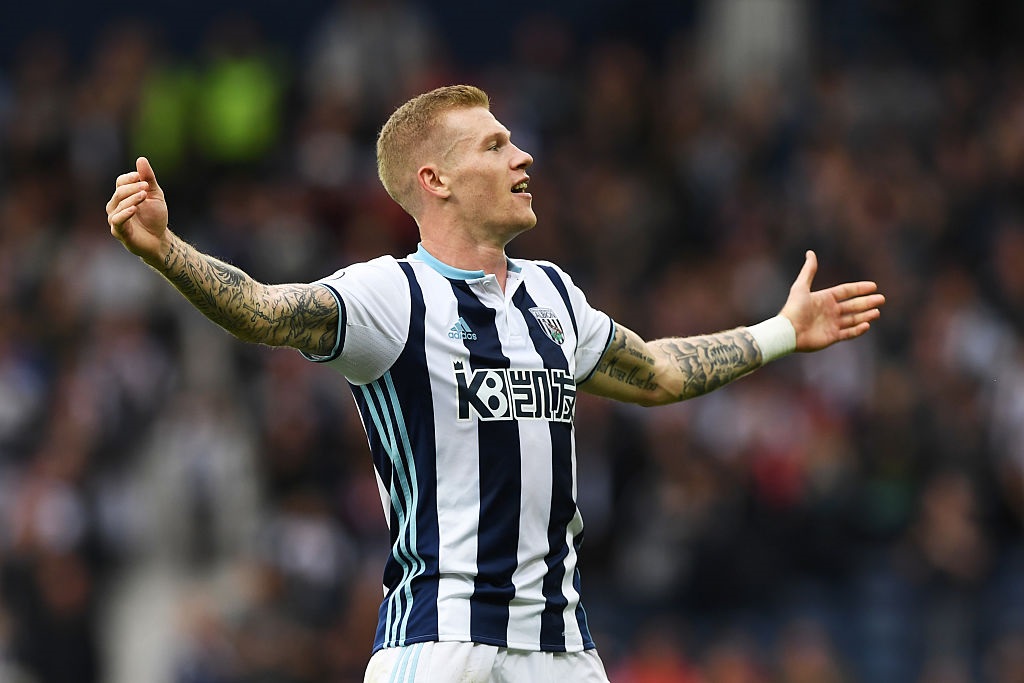 In the football world, he is something different, something very genuine. He is engaged in the world around him, he stands for things rather than going with the flow.

He was worth every leap of faith.

In a few weeks’ time the poppy issue will come around again.

You don’t have to agree with him to take a leap of faith on his sincerity and just enjoy him for what he brings to the game.