Oh, suit you sir! The Norwegian team suits for the 2014 Winter Olympics have to be seen to be believed

There's Norway these can be real, right!?

As if you weren't already excited enough about next month's Winter Olympics, the Norwegian curling team have already taken the gold medal in the fashion stakes as they unveiled their absolutely incredible team suits.

And you said that curling stars had no fashion...

Norway's curling team has AMAZING uniforms for the Winter Olympics. (via @AP_Images) pic.twitter.com/ZWqLk9PmLh

Impressive stuff from the suited Scandanavians, especially when we thought that their 2010 curling clown kit was Oslo as they were willing to go... 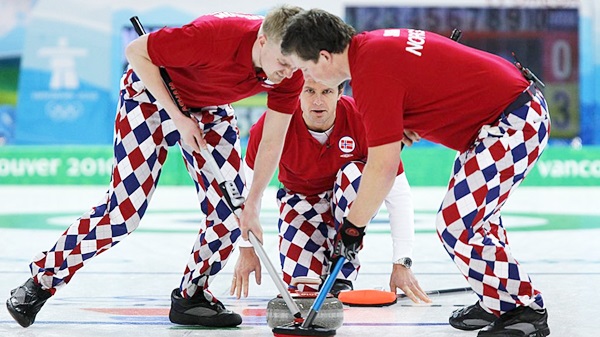 While these new suits certainly are eye-catching to say the least, it'll still take some doing to beat the Liverpool team suits from the 1996 FA Cup.

Sweety Jeebus in Heaven, just what were they thinking. At least Roy Evans' team made up for it by going on to wallop Manchester United in the actual football mat... oh no wait.

popular
People want "offensive" Crown Paints advert banned after attracting hundreds of complaints
Netflix has just added 23 very big movies to its library
Disney+ has just added 10 big movies to its library
Human remains found in suitcases are the bodies of two children
A terrific '90s crime drama is among the movies on TV tonight
The 50 most iconic songs of all time* have been revealed
Why Bran Stark is the true villain of Game of Thrones
You may also like
1 week ago
The Ultimate "That Actor From That Thing" Quiz
1 month ago
The Chase star Bradley Walsh can't control his laughter after the most NSFW answer ever
2 months ago
WATCH: Lightyear star reveals who'd win in a fight between him and Thanos
2 months ago
30 years on, The Simpsons writer confesses he misunderstood iconic joke
5 months ago
30 years ago, Arnie's biggest prank ended with Stallone's biggest flop
6 months ago
China gives Fight Club a new ending, manages to completely change the plot of the movie
Next Page