UFC 178 was a huge day for Irish MMA fans and rightly so. But this weekend promises to be just as big for the fighting Irish as no less than three Irish Fighters take to the Octagon this Saturday across two continents.

At UFC Fight Night 53 in Stockholm, our own Cathal Pendred takes on Gasan Umalatov while our adopted Icelandic brother Gunnar Nelson headlines the event in his welterweight bout against American Rick Story.

Meanwhile in Nova Scotia, Canada, Paddy Holohan will enter the cage to take on Chris Kelades in an exciting flyweight encounter.

JOE has taken a look at both events and prepared a quick preview of the Irish guy’s fights so you can sit back, relax and enjoy the action tomorrow night.

END_OF_DOCUMENT_TOKEN_TO_BE_REPLACED

This is the big one for Irish MMA fans with basically two Irish fighters on the card (yes, we are claiming Gunnar as our own).

Nelson is in a tough welterweight bout with the often underrated Rick Story and is surely in for his sternest test to date. Let’s not forget that Story has defeated current UFC welterweight champion Jonny Hendricks during the reality series The Ultimate Fighter so he is not a challenge to be taken lightly.

END_OF_DOCUMENT_TOKEN_TO_BE_REPLACED

This really is an intriguing contest between two fighters who have some similar strengths but also approach the fight completely differently. Story likes to be aggressive and control the Octagon cutting off the avenues of escape and dragging his opponents into a brawl. But he also has a pretty nifty wrestling game and is an accomplished grappler if the fight ends up on the ground.

Nelson is more of a counter-attacking fighter which should suit this fight against the aggressive Story. Nelson is also a highly-effective grappler and finishes most of his fights by battering his opponents on the ground until they relent and then he submits them, often times with his favoured rear-naked choke.

END_OF_DOCUMENT_TOKEN_TO_BE_REPLACED

This is an enthralling match-up and the winner will surely be aiming for bigger things in the welterweight division next year, mainly a title shot if they can gain some momentum from Saturday’s fight. We are going for Nelson via submission in the second round.

Elsewhere in Stockholm, Cathal Pendred features on the undercard and will be hoping to add to his victory at UFC Dublin when he faces the relatively unknown Gasan Umalatov.

Pendred is a big welterweight and will be looking to use size advantage against his Russian opponent. Both fighters are relatively inexperienced in the UFC, Pendred has fought once while Umalatov has fought just twice.

This is a huge fight for both fighters as they aim to build some sort of momentum in the UFC and rise higher in the division and not populate the lower preliminary rungs of UFC events.

Pendred is a methodical fighter and he rarely finishes fights in highlight reel fashion like his stable mate Conor McGregor, but that doesn’t make the Dubliner any less effective. ‘The Punisher’ batters his opponents into the mat and has grounded out victories against some accomplished opponents. One thing he does do like McGregor is wind up his opponents and get inside their heads, just have a look below...

Video via The Ultimate Fighter.

He also has underrated grappling game and is more than capable of performing some decent submissions, as he showed at UFC Dublin. We like the look of Pendred for this fight and we think he will win this fight via unanimous decision.

Just the one Irish man on the card in Canada but there is still every reason to tune in. Dubliner Paddy Holohan makes his second UFC appearance when he takes on Chris Kelades in a flyweight bout on Saturday night.

Holohan was originally pencilled in to face Louis Gaudinot on Saturday, but the Frenchman pulled out of the contest on Monday and was replaced by Canadian Kelades. He will have the support of the home crowd which spur him on in his bout with Holohan on Saturday. 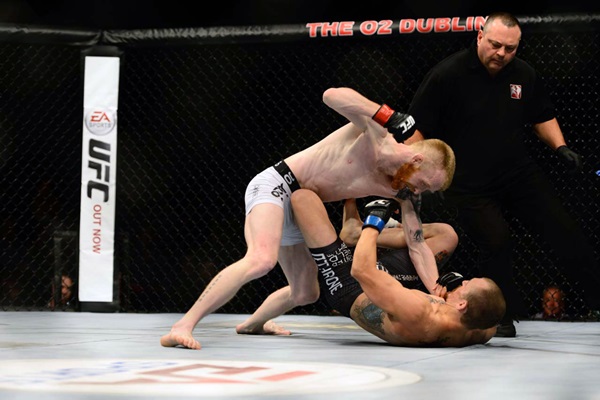 Holohan was impressive in his victory over Josh Sampo

Holohan comes on the back of a rapturous performance at UFC Dublin which saw him choke out Josh Sampo, much to the delight of the Irish faithful in attendance. He showed good character to recover from a slightly nervous opening and beautifully defeated his American opponent.

However, we expect that submission specialist Holohan will come out on top against his inexperienced opponent and double his winning record in the UFC. The Dubliner is a quality operator and will surely have too much in the tank for the former pastor. We predict a Holohan win via submission in round two.

popular
Man hasn't put arm down for 10 years - and this isn't even a world record
Jeffrey Dahmer’s dad thinks he knows what’s to blame for son becoming a serial killer
€600 energy credits and free schoolbooks for children set to be announced in Budget 2023
QUIZ: Test your knowledge with this Ultimate Friends Character Quiz
Fine Gael Councillor slams attendees of cost of living crisis protests
The JOE Friday Pub Quiz: Week 313
House Of The Dragon is already better than Game Of Thrones
You may also like
2 years ago
Paddy Holohan has been suspended from Sinn Féin over his claims that "scum" underage girls were having sex with men and blackmailing them
3 years ago
Straight Blast Gym Ireland to open new location in Dublin this month
3 years ago
WATCH: Irish MMA fighter shares lovely video of him and his grandad singing 'Imagine' together
3 years ago
WATCH: Conor McGregor is beaten by Khabib Nurmagomedov as all hell breaks loose at the end of the fight
3 years ago
WATCH: The Irish have taken over Las Vegas ahead of the McGregor fight
3 years ago
Channel 5’s Bellator MMA coverage shows Peppa Pig instead of the main event
Next Page