PIC: Paddy Losty would have appreciated the Galway Pintman flag in Hill 16 yesterday

Maureen will have had her work cut out putting fries on for Galway people on Monday morning.

Galway fans brought plenty of colour to Croke Park on Sunday and after the match was over, it was great to see David Burke pay tribute to "the 16th man" and to see the Galway players do a lap of honour to show their appreciation for the supporters' efforts.

Burke didn’t single out any one fan, of course, but if he had, he might have mentioned the bearer of a flag on Hill 16 featuring an ode to a man, who, alongside the Galway hurlers, has been one of the biggest stories of 2017.

END_OF_DOCUMENT_TOKEN_TO_BE_REPLACED

Paddy Losty wasn’t mentioned by name on a maroon flag spotted on Hill 16 by Sportsfile's Ramsey Cardy, but one of the many memorable phrases in a verse inspired by him was; Galway didn’t quite manage 45 points, but they made a good fist of it all the same. 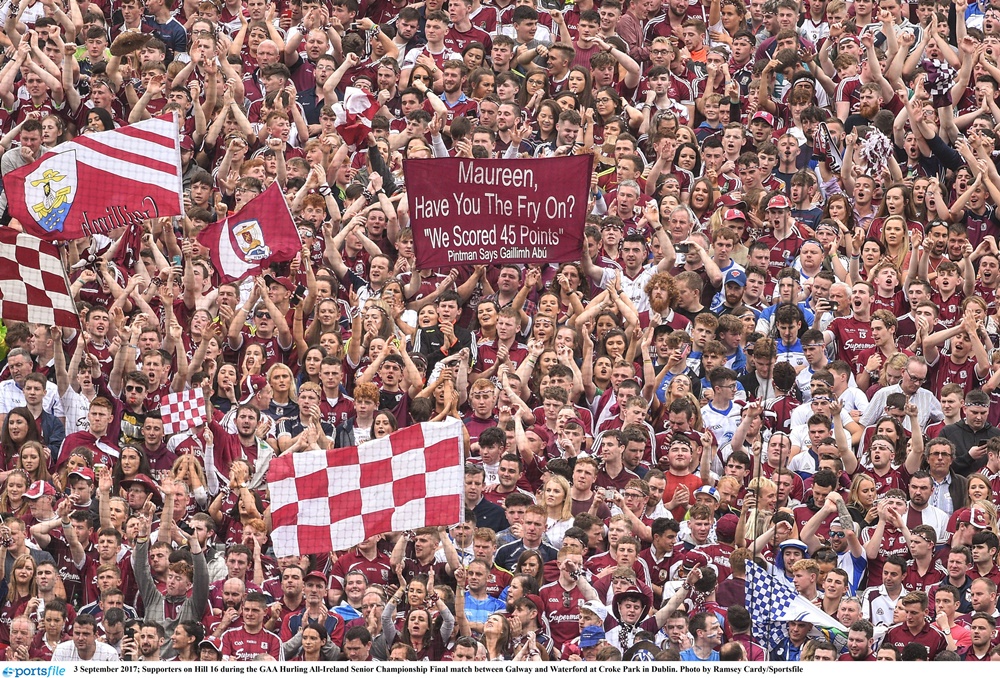 Judging by the celebrations in the aftermath of the game in Galway city on Sunday evening, we’re sure there were plenty of Galway fans looking for the fry this morning and no doubt even more who are prepared to “go at it agin” when the team arrive back this afternoon.

Let’s just hope that, amidst the madness, that everyone's shirts manage to remain on everyone’s backs.

The Big Reviewski || JOE · The Big Reviewski with Y: The Last Man, that Malignant ending & a secret streaming service
popular
Aer Lingus announces flight sale as US to lift travel ban for vaccinated EU passengers
Cork City Centre described as a "no go area" after man pulled from wheelchair in violent attack
The Big Reviewski JOE Movie Quiz: Week 120
The 50 most iconic songs of all time* have been revealed
The weather for the week ahead looks very autumnal indeed
Wally the Walrus "well on his way home" after being spotted in Iceland
WATCH: Margaret Thatcher was briefly resurrected at the Emmy Awards
You may also like
11 months ago
Post-match celebrations and a lack of social distancing at certain events put club game on hold
11 months ago
Cork GAA pleads with clubs and supporters “not to engage in celebrations that breach current guidelines”
1 year ago
What's the Bronco test and why it may come up in conversation this week
1 year ago
The Andy Moran GAA Isolation Workout
1 year ago
SuperValu, Centra and the GAA team up on initiative to support elderly people
1 year ago
Meath GAA club confirm adult player has tested positive for coronavirus
Next Page