Players participating in this weekend’s Unibet Masters event in Milton Keynes will not be accompanied by walk-on girls.

The Professional Darts Corporation (PDC) has confirmed that walk-on girls will no longer be used at its events, effective immediately.

The practice of women accompanying male darts players onto the stage at darts events has been in existence for years and has been the subject of regular criticism; the PDC said it took the decision based on feedback from broadcasters of darts events.

END_OF_DOCUMENT_TOKEN_TO_BE_REPLACED

"We regularly review all aspects of our events and this move has been made following feedback from our host broadcasters," the PDC said in a statement to the Press Association.

"The PDC wants more people to see it as a sport. It does not interest me (walk-on girls). It is just a sport," Van Gerwen said.

Van Gerwen’s compatriot, Raymond van Barneveld, is opposed to the decision, tweeting a link to a petition on Friday to maintain the tradition of walk-on girls, a petition that has received over 5,000 signatures to date.

I will really miss the girls !! For me they are a part of the darts. Sign their petition so they hopefully can keep their jobs @Charl0ttewood : https://t.co/FqhlOWY7tG https://t.co/YEpdtrwUqb 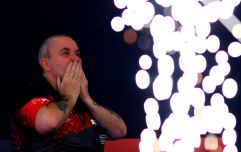 END_OF_DOCUMENT_TOKEN_TO_BE_REPLACED

The decision by the PDC is likely to lead to a review of women performing similar roles in other sports such as Formula One and boxing; in December of last year, Ross Brawn, F1 managing director of motorsports, told the BBC that the use of female promotional models is a "delicate topic" which is "under strong review".

popular
One of 2022's funniest movies has just been added to Netflix
Ryanair steward arrested after being caught on camera drinking during flight
HSE team outlines potential symptoms of Monkeypox virus
Leo DiCaprio's only Oscar-winning performance is among the movies on TV tonight
People with many sexual partners need to watch out for monkeypox, says chief UK doctor
The JOE Friday Pub Quiz: Week 295
QUIZ: Can you name every county in Ireland containing the letter 'O'?
You may also like
2 years ago
COMPETITION: Win a VIP package for the BoyleSports World Grand Prix Final
4 years ago
Classic '80s game show Bullseye looks set to make a huge comeback with a brand new presenter
6 years ago
VIDEO: A few pints didn't stop this darts beginner from nailing an amazing trick shot in a Mayo pub
6 years ago
PIC: These Irish girls from Mayo were caught holding a very bold sign at the darts
6 years ago
VIDEO: Look out for these 18 Irish lunatics on the darts on Sky Sports tonight
1 year ago
Four Irish players propelled into Lions debate after England hiding
Next Page