His passing was announced by his beloved Brighton and Hove Albion.

Legendary football commentator Peter Brackley died on Sunday evening aged 67, it has been announced by Brighton.

A lifelong Seagulls fan, Brackley was best known as the voice of the iconic Football Italia, Channel 4's Serie A highlights show which introduced the British public to the glitz and glamour of Italian football shortly after Paul Gascoigne's move to Lazio.

Brackley also worked for ITV and Sky throughout his career, which began at BBC Radio Brighton, and saw him commentate at four World Cups and two European Championships.

Everyone at the club is deeply saddened to hear news of Peter Brackley's passing. Our best wishes go to Peter's family and friends at this very difficult time.#BHAFC 🔵⚪️

Brackley will likely be best known by some for his work on Konami's popular Pro Evolution Soccer series, which he commentated on for a number of editions with a clearly comedic tone. 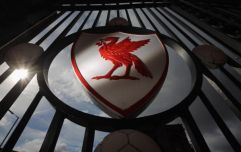 END_OF_DOCUMENT_TOKEN_TO_BE_REPLACED

Brighton chief executive Paul Barber said on the club's official website: "So many of us here at the club knew Peter well. He was a hugely talented, knowledgeable, funny and, above all else, a good man.

"We will miss him. Our condolences go out to Peter's family, including our colleague and his nephew Paul, and all of his many friends."


popular
QUIZ: Try get 12/12 in this short general knowledge quiz
QUIZ: How well do you remember the final season of Game of Thrones?
PERSONALITY QUIZ: Which Normal People character are you?
QUIZ: Can you name the country for each of these non-capital cities?
The United Kingdom's latest mess would be funny if it wasn't so bloody tragic
EXCLUSIVE: Cardboard Gangsters stars reunite in super trailer for gritty new Irish thriller Broken Law
The 50 most iconic songs of all time* have been revealed