This is something we could definitely get behind.

It’s been a little over decade since there was serious ripples of excitement in the GAA community in Ireland over the release of Gaelic Games Football on the PlayStation 2.

To say that it was a disappointment would do a disservice to the word ‘understatement’ (we’ve elaborated upon exactly how bad it was here) and even though a sequel to the game was a lot better, such was the disgusted reaction to the first game that it never stood a chance.

END_OF_DOCUMENT_TOKEN_TO_BE_REPLACED

Time heals all wounds, however and there would appear to be an appetite amongst GAA and gaming fans for another bite at the cherry if a developer was willing to give it a shot.

In an effort to set the wheels in motion, the Irish GAA banter page have submitted a petition on change.org seeking support for their appeal to EA Sports, the developers behind the ridiculously successful FIFA series, to give it a go. 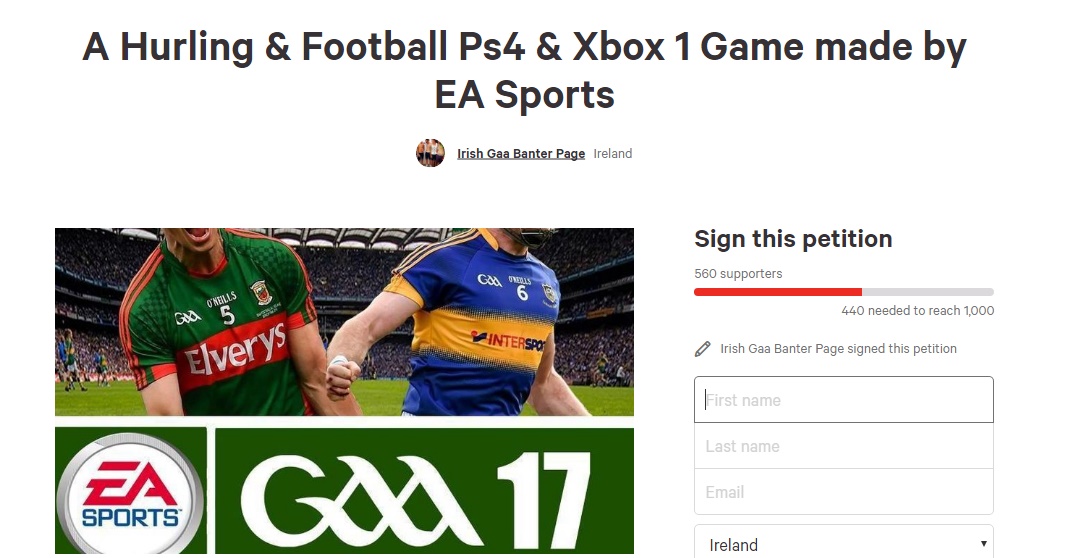 Their claim that such a game “would outsell the likes of FIFA 17 in Ireland on both Xbox and Playstation platforms” is a debatable one, but there is a possibility that, as they say, that any potential game “would also have a very strong market in the United Kingdom, United States of America and Australia”.

END_OF_DOCUMENT_TOKEN_TO_BE_REPLACED

The petition had already attracted 560 of its targeted 1,000 signatures by 10.30am this morning, although we’re sure that will increase significantly once word of the petition gets out.

If you want to add your name to it, you can do so here; by the looks of things, it has already attracted the support of a man who’d be a prime candidate to end up on the cover…*

*May or may not be actually be Dublin star Diarmuid Connolly

popular
Man arrested following discovery of a body in apartment in Dublin
Weather advisory issued as temperatures in Ireland set to soar again
Man in his mid-20s dies in two vehicle collision in Cork
QUIZ: Can you score 12/15 in this difficult General Knowledge Quiz?
QUIZ: Test your skills to the limit with this General Knowledge Quiz
Family of Ashling Murphy share heartbreaking tribute at Fleadh Cheoil
The JOE Friday Pub Quiz: Week 306
You may also like
3 weeks ago
Looking for a hotel room for the All-Ireland Final weekends? It won't come cheap...
1 month ago
Taoiseach condemns "disturbing" fight at Galway v Armagh game
2 months ago
The 2 Johnnies share unbelievable catfish ordeal affecting over 40 people
2 months ago
Limerick hurler arrested following alleged altercation with Tipperary player in Limerick pub
3 months ago
Woman in her 20s dies after accident during Camogie match
9 months ago
Wicklow GAA to investigate fight after Under 15 match on Saturday
Next Page