An old tweet has come back to haunt Phil Neville.

Neville's reign as the new manager of England women's football team didn't get off to the greatest start as he's been forced to delete his whole Twitter account after a 2012 post re-emerged on Tuesday evening.

"I am honoured to be given the chance to lead England," Neville said in a statement.

However the former Manchester United and Everton player's excitement didn't last long as he quickly went into panic mode after his followers reminded him of a tweet from six years ago in which he made some less-than-flattering remarks about women. 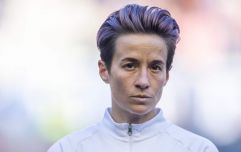 END_OF_DOCUMENT_TOKEN_TO_BE_REPLACED

In an attempt to explain why he'd said "morning men" in his first tweet of the day in January of 2012, Neville claimed that he "thought the women would of been busy preparing breakfast/getting kids ready/making the beds."

The reductive assessment of women was understandably criticised by his followers, who questioned how suitable the 41-year-old was for the role, given his past opinions on females.

Neville quickly deleted his entire Twitter account and we can likely expect a statement of apology before long.

And on what was supposed to be a night of celebration for the former England international, Neville instead received a stark reminder that the internet simply never forgets.

Suppose they'll struggle with stepovers because of their shoes as well Phil. 🤦‍♂️

popular
The Toy Show DJ brothers have been offered their very first gig
Clint Eastwood's final western is among the movies on TV tonight
The JOE Friday Pub Quiz: Week 271
PCR tests to be required for all international arrivals to the UK
QUIZ: Let's get cracking with this General Knowledge Quiz
Iconic nightclub venue in Galway announces permanent closure
QUIZ: Name all the counties of Ireland with 6 letters or less
You may also like
7 years ago
Pic: Manchester United's Class of '92 as you've never seen them before... on the labels of Coke bottles
7 years ago
Pic: Jamie Carragher launches another zinger at the Nevilles on Twitter
7 years ago
Vine: Rio Ferdinand provides easily the best punditry moment of the World Cup so far
7 years ago
Video: Phil Neville tries to sit back and relax on a train, comes across this loudmouth City fan
7 years ago
Video: Manchester United's Class of ’92 take on the builders of the new Hotel Football in a rooftop five-a-side
7 years ago
Ryan Giggs calls on old buddy Paul Scholes to help him out at Manchester United
Next Page