Pic: A ridiculous 160/1 Champions League accumulator that landed for one JOE reader tonight

Carl Thompson puts his prophetic powers down to ‘a few too many pints’. Sigh…

Despite the many hours of study we put in, our football accumulators rarely come off. As you can see over here, we’ve even been stupid enough to take on Ladbrokes with our ability to pick them. After week 1, we have a big fat zero.

Maybe we need to call up Carl Thompson. The 18-year-old sent us his winning docket tonight and it’s a cracker.

END_OF_DOCUMENT_TOKEN_TO_BE_REPLACED

Incredibly, all 10 of those punts landed, at odds of around 160/1. Carl’s cheeky tenner, which he says was inspired by ‘a few too many pints’ has netted him a four-figure sum in the region of €1600. 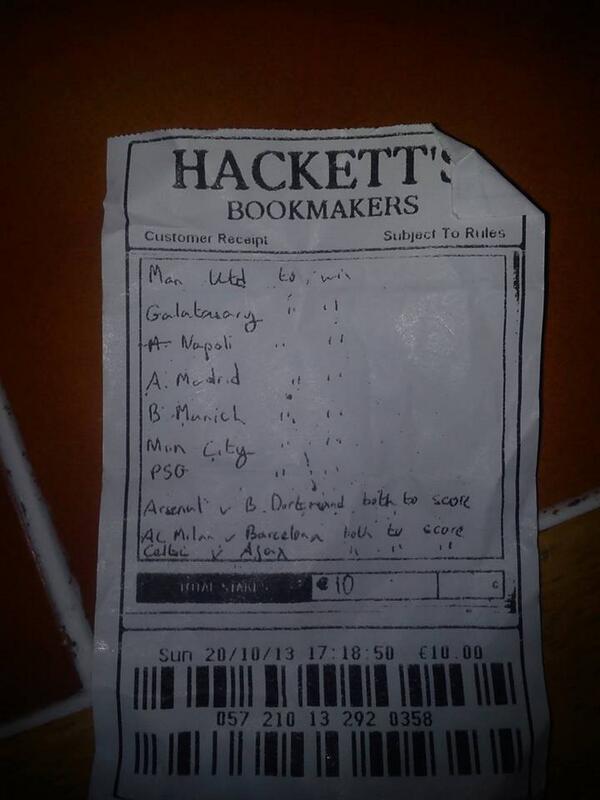 Carl also claims it is his first ever bet. Our advice is to quit now while he is ahead, he’ll never match this again.

popular
The JOE Movie Quiz: Week 166
The JOE Friday Pub Quiz: Week 306
QUIZ: Test your skills to the limit with this General Knowledge Quiz
QUIZ: Can you score 12/15 in this difficult General Knowledge Quiz?
Man in his mid-20s dies in two vehicle collision in Cork
Family of Ashling Murphy share heartbreaking tribute at Fleadh Cheoil
One of the best Irish films of recent years is among the movies on TV tonight
You may also like
2 days ago
The JOE Friday Pub Quiz: Week 306
5 days ago
Rebekah Vardy breaks down in tears in first TV interview since Wagatha Christie defeat
1 month ago
Gary Lineker says he suffered racist abuse during football days due to "darkish skin"
2 months ago
Merseyside police defend ‘exemplary’ Liverpool fans tear gassed by French police
2 months ago
BBC trainee accidentally posts message mocking Man United live on TV
2 months ago
Kurt Zouma charged with three animal welfare offences
Next Page