PIC: An amazing referee's report from a heated under-16 GAA match back in 1993

The reason we're bringing this game to your attention is because the referee's match report from that night has surfaced online and it's simply amazing.

Wayne Costello posted Michael Joyce's report on Facebook this evening and it's one of the funniest things you'll ever read. 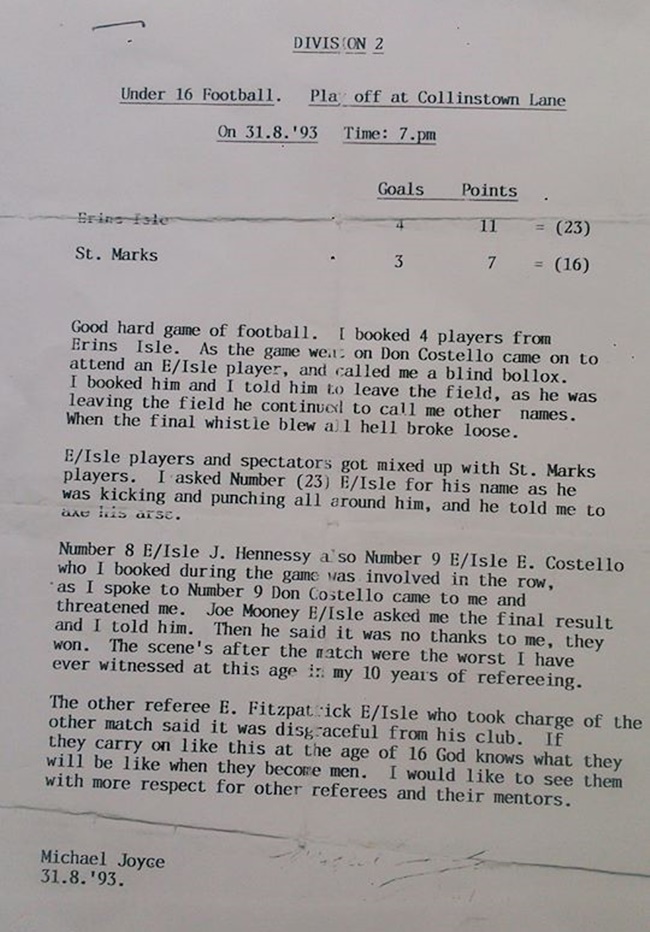 Poor Michael put down a tough evening out on the pitch, but thankfully he lived to tell the tale.

The Big Reviewski || JOE · Matt Damon, Camille Cottin, Abigail Breslin and director Tom McCarthy discuss new drama Stillwater
popular
Leo Varadkar said he tried to be "extra careful" while attending Katherine Zappone's 50 person function at hotel
1,314 new cases confirmed across Ireland as total of deaths related to Covid-19 climbs to 5,044
WATCH: Matt Damon reacts to Dalkey bar creating a cocktail called The Matt Damon
Scientist says decision to go ahead with communions and confirmations could lead to "super-spreader events"
Netflix unveils its full list of classic movies arriving throughout August
Electric Picnic won't go ahead this year as Laois County Council refuse to grant licence
Met Éireann issues weather warning for entire country ahead of week of thunder and flooding
You may also like
9 months ago
Post-match celebrations and a lack of social distancing at certain events put club game on hold
9 months ago
Cork GAA pleads with clubs and supporters “not to engage in celebrations that breach current guidelines”
1 year ago
What's the Bronco test and why it may come up in conversation this week
1 year ago
The Andy Moran GAA Isolation Workout
1 year ago
SuperValu, Centra and the GAA team up on initiative to support elderly people
1 year ago
Meath GAA club confirm adult player has tested positive for coronavirus
Next Page