Pic: An incredible ten-foot high replica of the Sam Maguire built in stone in Donegal

Good luck to anyone trying to lift that…

Whenever a county manages to get their hands on the prestigious Sam Maguire trophy they want to hold onto as long as possible and although Donegal had to surrender Sam to the Dubs last September, a farmer in the county has ensured that it will never leave the hills.

Last night, the official GAA Twitter account posted a picture of a remarkable ten-foot high replica of the Sam Maguire trophy made entirely of stone by Anthony Barrett, a farmer living in Newtoncunningham who originally hails from Omagh in Tyrone. 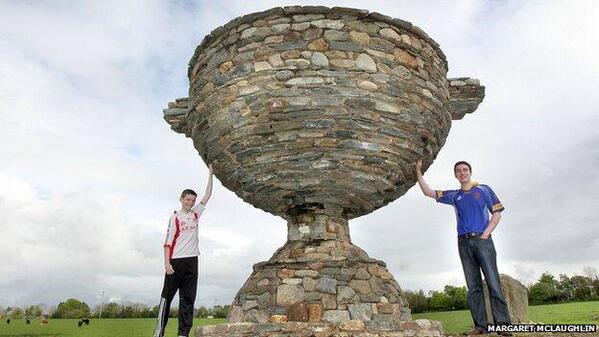 The replica, which is 12 feet wide and ten feet high, took Barrett three months to complete and speaking about his magnificent creation to the BBC, Barrett said: “It's my wee treat, because of my love of football and the fact my daughter plays with the Tyrone minor ladies.

"It took a bit of time. I could only build an inch or so each day. If I had put on more stone at the same time I was afraid of it collapsing," he added.

The most surprising thing about Barret’s creation is that he is not a qualified stone mason, yet according to a piece on the GAA website, he has used stone to create other masterpieces on his land such as a large castle and two round towers.

END_OF_DOCUMENT_TOKEN_TO_BE_REPLACED

We can only add to the praise that Barrett is no doubt receiving in large supply since his masterpiece was completed but at the same time warn him that he may soon be inundated with requests to erect similar replicas in other counties where Sam hasn’t been seen for quite some time.

Your humble author may or not be talking about his own county, which lies west of the Shannon and where success hasn't been tasted in over 60 years despite coming painfully (oh so painfully) close to doing so on numerous occasions in recent years...

popular
Amazon Prime Video has just added 16 big movies to its library
Several people killed after crush at Africa Cup of Nations match
QUIZ: We bet you can't get full marks in this extremely frustrating geography quiz
WATCH: The trailer for this celebrity murder mystery improv comedy looks incredible
"It will be with me until I die" - Charlie Bird opens up about "loveliest gesture" from Daniel O'Donnell
A new law now prevents employers using tips to ‘make up’ rates of pay on contracts
One person killed and three wounded in lecture hall shooting in Heidelberg
You may also like
3 months ago
Wicklow GAA to investigate fight after Under 15 match on Saturday
1 year ago
Post-match celebrations and a lack of social distancing at certain events put club game on hold
1 year ago
Cork GAA pleads with clubs and supporters “not to engage in celebrations that breach current guidelines”
1 year ago
What's the Bronco test and why it may come up in conversation this week
1 year ago
The Andy Moran GAA Isolation Workout
1 year ago
SuperValu, Centra and the GAA team up on initiative to support elderly people
Next Page