It's the t-shirt of the summer.

Sometimes it's hard to imagine that football managers are people just like us but in fact, they're probably more in need of a relaxing holiday than most.

Football fans are more used to seeing Arsenal manager in those long puffy jackets that he loves so much but it seems that the Gunners boss is sporting a very different look on his holiday in Morocco.

"Le Professeur"was recently managing a team that took part in a charity game in Marrakesh.

Didier Drogba, Djibril Cisse and Robert Pires all featured in the match but Wenger's t-shirt was definitely the focus of our attention. 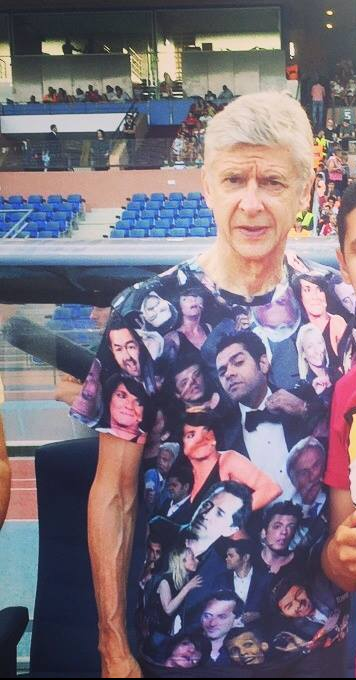 As good as this is, it's still not the funniest 'clothes-related' piece of comedy that the Arsenal boss has been involved with.

Hat-Tip to 101GreatGoals for this

The Big Reviewski || JOE · Shane MacGowan snarls & stars in this new documentary from Julien Temple
popular
9 weird and wonderful Irish Christmas traditions we absolutely love
The JOE Friday Pub Quiz: Week 220
The JOE Movie Quiz: Week 80
The JOE Music Quiz: Week 36
Harry Styles hits back at critics who told him to be more 'manly'
Status Yellow snow warning issued for five counties
The 50 most iconic songs of all time* have been revealed
You may also like
4 days ago
EA Sports respond to 'baseless' lawsuit over alleged scripting in FIFA 21
1 week ago
Diego Maradona: A remarkable career in pictures
1 week ago
Tributes pour in after Diego Maradona dies aged 60
1 week ago
PS5 controller trigger will tighten to indicate player fatigue on FIFA 21
2 weeks ago
Megan Rapinoe admits 'teasing the English is such a pleasure'
2 weeks ago
Ryan Reynolds and Rob McElhenney's takeover of Wrexham AFC approved
Next Page