Whatever happened to Swiss neutrality?

As you may know, Liverpool fans will have to be content with playing Europa League football in 2015 after Brendan Rodgers' side were eliminated from the Champions League group stages.

FC Basel have proven to be stubborn opposition for English clubs in recent seasons, having beaten Manchester United, Chelsea and Tottenham in respective campaigns over the last few years, and they claimed another scalp this season.

END_OF_DOCUMENT_TOKEN_TO_BE_REPLACED

Fabian Frei's goal proved to be crucial last night and Brendan Rodgers was even left walking alone as he headed down the tunnel.

The Swiss side posted this image demonstrating the fact that they're a scourge for English teams on their Instagram account before quickly deleting it... 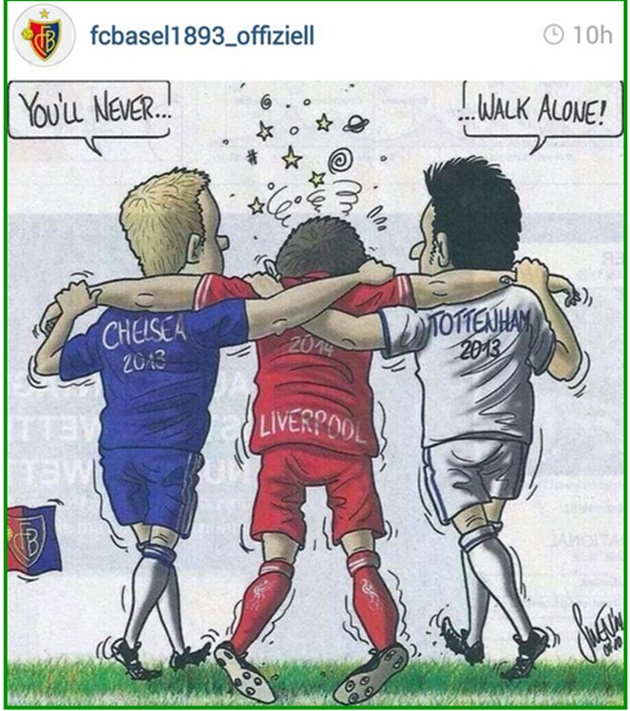 The Big Reviewski || JOE · The Big Reviewski with Dune, a mini-Hangover reunion & the best of Timothée Chalamet
popular
CONFIRMED: Nightclubs to open at 100% capacity, 11.30pm curfew has been removed
Two Gardaí assaulted during protest in Dublin City Centre
QUIZ: Can you name all the countries beginning with L?
HBO announces a new Sopranos series is in the works... kind of
The cast of Succession on shooting the next season in Ireland
How to lower your cholesterol - 5 really handy tips
Here's the lineup for this week's Late Late Show
You may also like
1 week ago
The JOE Friday Pub Quiz: Week 264
1 month ago
Manchester City's Benjamin Mendy charged with four counts of rape
2 months ago
Michael Ballack’s son Emilio, 18, dies in 'quad-bike crash’
2 months ago
Five football documentaries to watch to kill time before the new Premier League season
4 months ago
Christian Eriksen shares first update from hospital as he undergoes tests after cardiac arrest
4 months ago
Christian Eriksen stable but may not play football again, says sport cardiologist
Next Page