We're not sure of the size of the intersecting section on the Venn diagram for those people out there who are both big fans of minor league baseball and fans of Star Wars, but if the amount of teams making jerseys themed around the sci-fi classic is any indication, then it must be pretty big.

The Durham Bulls (our favourite team, don't you know) have decided to get in on the act with a special shirt just in time for May 4th this year that will see the players bearing a striking resemblance to R2-D2. May the fourth be with you...get it?

In the case of our #StarWars Night jerseys on May 4, these ARE the droids you're looking for. http://t.co/bjnVjm3Bhr pic.twitter.com/9dYF1kj8SZ

They're not alone however, as the brilliantly named Toledo Mud Hens had a similar effort last year, which was arguably even better. 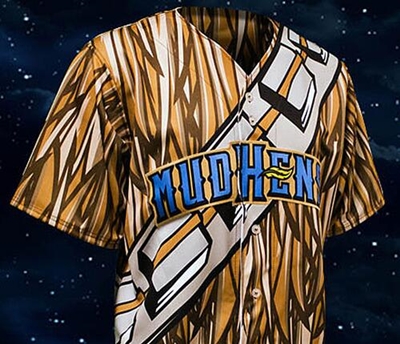 popular
Amazon Prime Video has just added 21 big movies to its library
Here is a list of every Bank Holiday in Ireland in 2023
One of the best crime thrillers ever is among the movies on TV tonight
The 50 most iconic songs of all time* have been revealed
Mark Hamill on the one piece of dialogue he got removed from the original Star Wars
Edward Scissorhands was very nearly played by a much-loved Oscar winner
Netflix has just added one of the best sci-fi movies of recent years
You may also like
1 year ago
Penneys to create 700 jobs over new investment and store
1 year ago
You can now buy high-end Stella Artois shirts, trousers and jumpers
2 years ago
Nike release first pair of hands-free runners
2 years ago
QUIZ: Do you know the names of these classic trainers?
2 years ago
New Irish fashion label seeking ‘burly’ male model to be the face of the brand
3 years ago
Aer Lingus unveil brand new uniform for flight attendants
Next Page