PIC: Dublin punter set to claim just under €25,000 after this €5 accumulator came up trumps

Drinks are on this guy this Christmas.

Christmas came early for a Ladbrokes punter in Dublin this weekend, when a €5 accumulator with odds of 4,995/1 came good, earning him a tidy sum of €24,777.90 in the process.

The customer, a regular at the bookmaker's North Strand branch in Dublin, placed the winning ‘Result Rush’ wager at a Betstation in the shop, correctly predicting whether both teams would score and the winning team of six matches over the weekend.

END_OF_DOCUMENT_TOKEN_TO_BE_REPLACED

The punter in question is either the biggest football expert on the planet or just incredibly lucky, as the six games in question included much-anticipated encounters such as Ruch Chorzow v Jagiellonia Bialystok and CS Gaz Metan Medias v CS Concordia Chiajna. 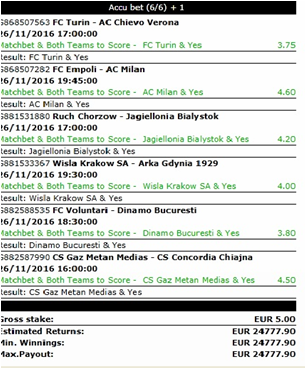 Commenting on the windfall, Hayley O'Connor of Ladbrokes said: "For us this is the nightmare before Christmas. For our customer, the festivities begin in the North Strand this year, not the North Pole, but rather than act the Grinch, we'll wish him well."

The Big Reviewski || JOE · Colm Meaney & his Pixie co-stars on deadly gangster priests, Irish accents & pickled onion crisps
popular
Status Yellow snow warning issued for five counties
Here's Week 58 of JOE's 19 in 90 quickfire quiz
Here's the lineup for this week's Late Late Show
Six new Covid-19 deaths confirmed, 183 new cases
A full breakdown of all of the streaming services available in Ireland
Lotto players urged to check tickets after someone won €10.7 million
What the hell is 'Stomp and Holler', and why does Spotify insist that you love it?
You may also like
5 days ago
Man arrested following the murder of a woman and two children at a house in south Dublin
1 week ago
Two new metro routes and rail line to Navan proposed in new transport plan for Greater Dublin area
1 week ago
Two homeless men found dead in Dublin
1 week ago
€5 million of suspected ecstasy and MDMA seized by Gardaí in Dublin
2 weeks ago
Gardaí renew their appeal for witnesses to fatal assault in September
2 weeks ago
Two Dublin restaurants win big at the World Luxury Restaurant Awards
Next Page