The Austrian driver is dubbed ‘elderly fan’ in caption, as unrecognisable as our Robbie once was beside Becks.

Maybe it is the star power of David Beckham but it seems he has a habit of eclipsing other big names in his presence.

Last year, one of our all-time sporting greats Robbie Keane was cruelly dubbed ‘unidentified fan’ in a photo caption with Goldenballs and now, three-time Formula 1 champ Niki Lauda has suffered the same fate.

Pictured with Beckham at the Singapore GP, Heart FM identify Lauda only as ‘elderly fan’. We know he has been out of the sport for a while, but the cinematic success of Rush should have made him a bit more recognisable of late. 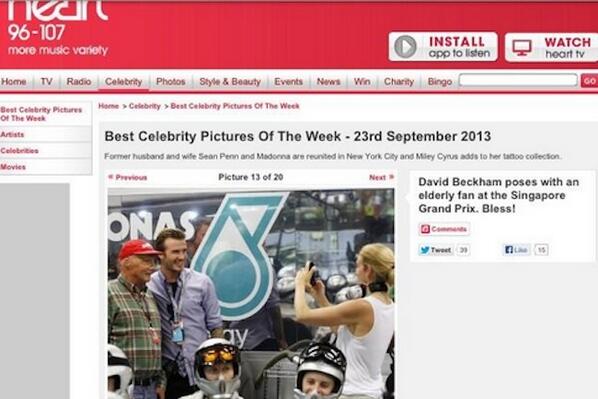 Hat-tip to Paddy Power for the picture.

popular
Irish Rail will no longer provide on-board snack options for foreseeable future
The six Eurovision countries with "irregular voting patterns" have been revealed
Eurovision producers reveal "irregular voting patterns" during Saturday night's final
Work more hours or get a better job to tackle cost of living, says UK Minister
QUIZ: Try out one of our trickiest General Knowledge Quizzes yet
REVIEW: Van Gogh Dublin is a truly unique cultural experience
One of Liam Neeson's best ever performances is among the movies on TV tonight
You may also like
4 years ago
PIC: This is why you should always answer your phone when an Irish Mammy rings
4 years ago
PIC: Enda Kenny. On a Dublin Bike. In a vintage Mayo tracksuit. And a backwards cap. That is all.
5 years ago
PIC: You can almost feel this man's pain after his mates forcibly slapped his back
7 years ago
Pic: David Cameron stars in the funniest viral picture of the British election so far
7 years ago
Pic: WWE fan gets GIANT portrait of The Rock tattooed on their leg
7 years ago
Pic: Irishman snaps stunning pic of the Milky Way over Cork
Next Page