If you happen to be eating, put down whatever food you have before looking at this because it ain’t pretty.

If you participate in MMA or any combat sport you know that there are risks involved and from time to time you’re going to end up getting hurt; it’s just the way it is.

Poor Kaitlin Young, a bantamweight who fights in the Invicta Fighting Championships, discovered that recently after suffering a blow to the head from an opponent’s knee in training that left her with an incredibly nasty looking laceration down the middle of her forehead.

END_OF_DOCUMENT_TOKEN_TO_BE_REPLACED

“I shot under some punches in practice today, and my buddy kicked at the same time. Forehead vs Knee. Knee 1 - Forehead 0,” Kaitlin wrote under a photo she posted on her Facebook page and we can’t help but agree with her description of the result. 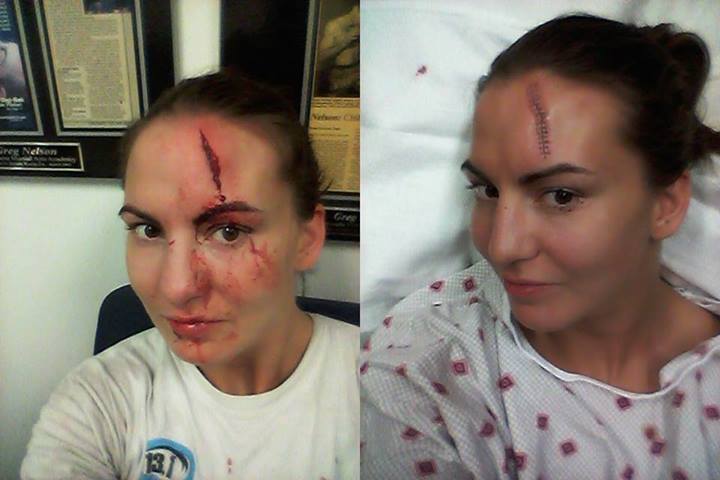 As you can see, the cut has since been patched up and although it’ll leave a mark for some time yet we’re sure Kaitlin will be fine and back in action in no time, if understandably a little more careful when training with that particular buddy of hers in the future.

popular
Budget 2023: Cigarettes going up, energy credits announced, child and social welfare increases confirmed
Two new 24-hour bus services are coming to Dublin
CONFIRMED: Renters to benefit from €500 tax credit as part of Budget 2023
An underseen disaster film is among the movies on TV tonight
Female child and woman in critical condition after incident in Clare
Female child discovered with serious injuries in Clare
Jeffrey Dahmer’s dad thinks he knows what’s to blame for son becoming a serial killer
You may also like
2 years ago
Paddy Holohan has been suspended from Sinn Féin over his claims that "scum" underage girls were having sex with men and blackmailing them
3 years ago
Straight Blast Gym Ireland to open new location in Dublin this month
3 years ago
WATCH: Irish MMA fighter shares lovely video of him and his grandad singing 'Imagine' together
3 years ago
Khabib Nurmagomedov is interested in a fight against Conor McGregor under boxing rules
3 years ago
WATCH: Conor McGregor is beaten by Khabib Nurmagomedov as all hell breaks loose at the end of the fight
3 years ago
WATCH: The Irish have taken over Las Vegas ahead of the McGregor fight
Next Page