Pic: Great news as Chris Henry is back training with Ulster following his recent surgery

The flanker recently underwent surgery “to repair a defect in his heart wall” but is back in training already it seems.

The last few weeks have been very happy ones for the Irish rugby team but amidst all the goodwill, there was also plenty of concern for Ulster flanker Chris Henry after his recent health scare.

Henry was originally part of Ireland’s squad for the November Internationals but was forced to withdraw from the team on the morning of the South Africa game after suffering what was first thought to be a severe migraine. 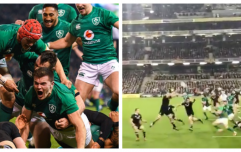 WATCH: Jacob Stockdale's superb try gets even better with this brilliant footage from the stands

END_OF_DOCUMENT_TOKEN_TO_BE_REPLACED

It was later revealed that this small migraine was in fact a temporary blockage of a small blood vessel for which he required surgery.

We're delighted to see that Henry is fit and back doing what he does best at the Kingspan Stadium. Take it easy now Chris!

First day back at Kingspan & great to c all the lads! Also never happier to c a bike! Day 1 of #injuredclub pic.twitter.com/b0z8qCUhnd

popular
New car-free town with population of 85,000 set to be built in Dublin
Elderly Irish man stabbed to death on mobility scooter in London
Galway City Council street cleaners claim Lotto jackpot worth over €5.5 million
Here's how to make €9-11 on Revolut in just a few minutes
QUIZ: Can you name all the countries beginning with A?
Articulated lorry driver in his 20s dies in Tyrone
A terrific '90s crime drama is among the movies on TV tonight
You may also like
3 years ago
Sinn Féin councillor condemns recent bi-lingual road signs being vandalised in Ulster
4 years ago
There's an excellent documentary about Tommy Bowe on TV tonight
4 years ago
Ulster rugby players release statement on Paddy Jackson and Stuart Olding departure
4 years ago
"Money did not drive the decision" - Head of Ulster Rugby on revoking Jackon and Olding's contracts
4 years ago
PODCAST: The story of the trial that gripped the nation as told by ever-present reporters in Courtroom 12
4 years ago
The end of year awards, James Downey, Iain Henderson and Kevin McLaughlin on The Hard Yards
Next Page