Pic: Has Linford Christie shown the world what Arsenal’s new PUMA kit will look like?

The British sprinter’s now deleted picture may be the first glimpse we have of the new Arsenal kit for 2014-15.

While it hasn’t been officially announced, everybody seems to believe that Arsenal will have their gear manufactured by PUMA next season, ending the Londoners association with Nike.

And at a PUMA do this week, it seems that a kit which may well be the one Arsenal wear next season was present. And, thanks to Linford Christie, we have a picture of it.

END_OF_DOCUMENT_TOKEN_TO_BE_REPLACED

The former sprinter tweeted a picture of himself with Bacary Sagna, Thierry Henry and Olivier Giroud and Henry and Giroud are wearing PUMA designed Arsenal gear.

Henry’s home shirt looks very slick indeed, while Giroud is surely wearing a training top rather than a new away kit. 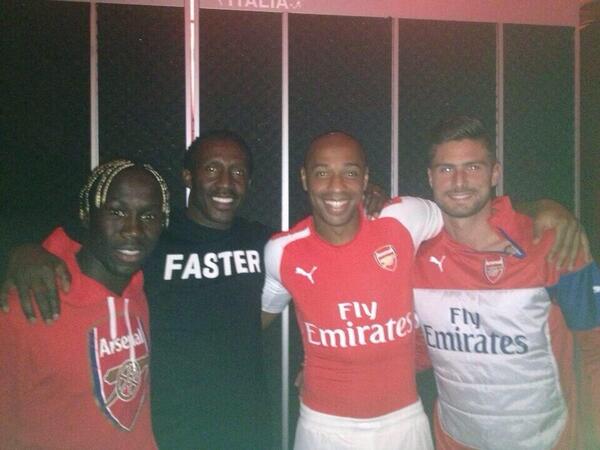 Christie has since deleted the tweet but it has been grabbed and shared all over the place today. Probably our first 'leaked jersey' story of the new season and it is only October.

popular
RSA confirm online theory tests to come into effect later this month
Everything you can do from tomorrow as biggest easing of restrictions in months to take place
QUIZ: Can you identify the EU country of origin from these €1 coins?
The JOE Movie Quiz: Week 101
The Ultimate Marvel Quiz: Falcon and the Winter Soldier
Micheál Martin says international travel could be possible by "latter part of summer"
2 more people with Covid-19 have died, 514 new cases
You may also like
7 months ago
Post-match celebrations and a lack of social distancing at certain events put club game on hold
7 months ago
Cork GAA pleads with clubs and supporters “not to engage in celebrations that breach current guidelines”
10 months ago
What's the Bronco test and why it may come up in conversation this week
1 year ago
The Andy Moran GAA Isolation Workout
1 year ago
SuperValu, Centra and the GAA team up on initiative to support elderly people
1 year ago
Meath GAA club confirm adult player has tested positive for coronavirus
Next Page